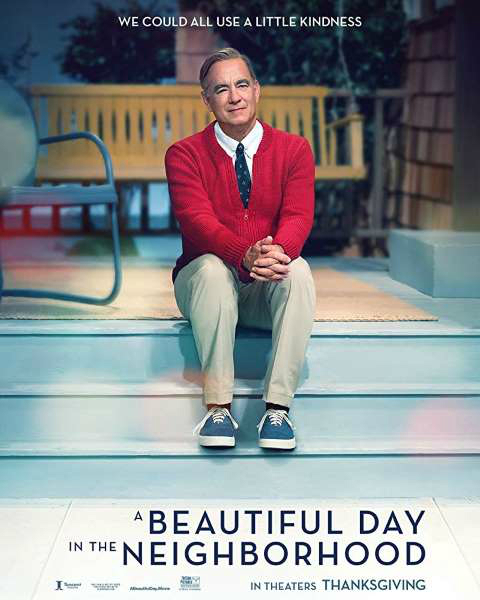 First of all, big kudos to the writers, Micah Fitzerman-Blue, and Noah Harpster. They put together an amazing story which showcased the brilliance of the beloved Fred Rogers. Although the story was only partially true (the character of Lloyd Vogal was based on writer Tom Junod) the embellishments were there to emphasize the true nature of our….hero.

Tom Hanks, of course, did a spectacular job of capturing the essence of Fred Rogers. The tone of Tom’s voice was a little off, but every inflection and nuance was shown respect by this talented actor. For me, it was in the eyes of Tom Hanks that revealed the absolute perfection in which he portrayed Mr. Rogers. It has been said that Tom has the kindest eyes in Hollywood, and this characteristic translated beautifully into the eyes of Rogers. So beautifully that it should garner, at the very least, an Oscar nod for Supporting Actor.

This is not a children’s movie; they’d be bored senseless. Instead, I believe the target audience are those who grew up watching Mr. Rogers. Or, as it is in my case, had children who watched the show.


I give A Beautiful Day in the Neighborhood a solid ‘A’.

About The Peetimes: I was able to get two good Peetimes in this movie. Both Peetimes have protracted scenes of very little dialog or complete silence as the characters have moments of deep reflection.

There are extra scenes during, or after, the end credits of A Beautiful Day in the Neighbourhood. (What we mean by Anything Extra.)