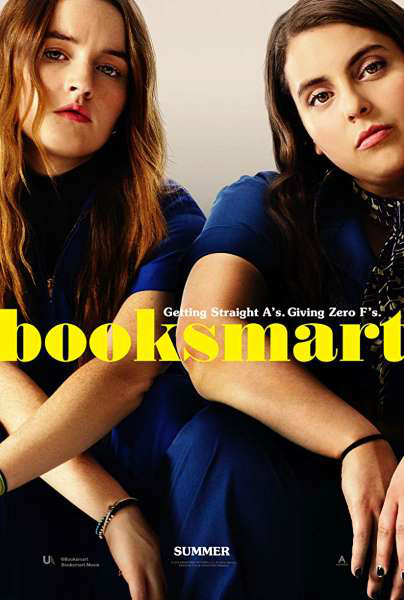 Booksmart is more smart than bookish, featuring the quirky party-hearty hijinks of a girl duo with genuine chemistry. Moverover, Booksmart, for all its modern nods, felt exactly like a 1980s John Hughes film. I mean that as a compliment.

It’s zippy, amusing, pleasant, and sometimes clever. It’s also sometimes raunchy, but never in an obnoxious way.  Booksmart is a fun film with a great message of acceptance.


But is Booksmart only for girls?

Well, no. NO, no, and no, unless you consider The Breakfast Club or Ferris Bueller only for boys. The two leads are gals — and one is an out gay, albeit absolutely inexperienced — but the cast is filled with many unexpectedly interesting characters, none of which are genuine asshats. It’s NOT a girl-power film. Molly and Amy — being bossy and shy respectively — just happen to be girls. No one finds it necessary to comment on it.

And no one gets tossed into lockers! No toilets swishies, underwear wedgies, or more than mild verbal taunts rear their ugly heads. Booksmart refreshingly features no genuinely mean-spirited bullying. Everyone is accepted as the weirdos we are all ultimately at heart: jocks, nerds, drama geeks, hot girls, druggies, manic pixies, artists, skate punks, whatever. I say refreshingly, since I hope high schools are so accepting of differences these days, even if they don’t want to hang out in the same clique. It’s a progressive message of hope.

What about that ending?

Nothing really gets resolved at the climax, but life isn’t usually neat like that. Even The Breakfast Club ended ambiguously. Here, we see — with wistful pain for us older folks — that intense high school bestie closeness is usually destined to fade with time. But you know what? The beauty of ‘what was’ can never be erased. (Karen and Betsy, I miss us.)

Do I miss high school? Was I a geek? You betcha, to both questions. And I cherish that time. In the midst of many dumb (and dumber) teen movies, this one’s a keeper.

PS: As I finish this review, The Breakfast Club’s iconic Don’t You Forget About Me just started on the radio. Coincidence? Probably. But a GREAT ONE. [Fist pump in the air.]

About The Peetimes: This really cute movie has 3 good Peetimes. The 2nd, at 1:04, is the best, but you’ll be fine if you read the synopses for any of them. I tried to avoid the best humor or plot pivots.

There are extra scenes during, or after, the end credits of Booksmart. (What we mean by Anything Extra.)

Rated (R) for strong sexual content and language throughout, drug use and drinking – all involving teens
Genres: Comedy, teen movie