I had a hard time with this review. Rocketman is both extraordinary (in costuming, sound, and visual sequences) and by-the-numbers (a creative life plagued by inner demons).

Elton John’s musical biopic is a grand fantasy with exciting numbers that feel like a top notch Broadway extravaganza. It’s got great pacing, fun set-pieces, an ideal cast, and a very special find in Taron Egerton.

Egerton looks like John, acts like him — and best of all — sounds like him. Except for the original Elton John song played over the end credits, Egerton does ALL his own singing. That’s no small feat. He’s simply brilliant. Egerton more than inhabits the role. 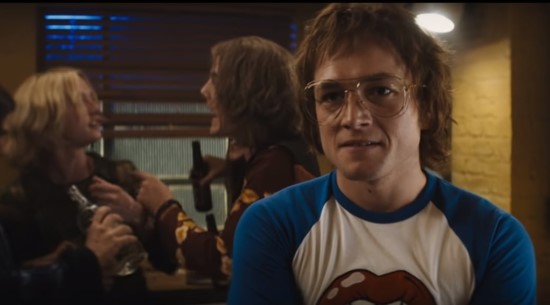 Rocketman is also very depressing. John has exactly two people in his life who are nice to him — his grandmother, and his long-time best friend and lyricist, Bernie Taupin. Everyone else is either mildly abusive or very abusive. That isn’t fun to watch. Almost everything between the rollicking tunes is about John’s sorrow, loneliness, obsessions, addictions, self-loathing, and an insane ability to absorb decades of personal torment…but somehow still be a beloved worldwide pop-culture phenomenon.

Was John’s life really this difficult? How much of this tale is true? Or did they make things so awful for John’s film character just to ‘liven things up’?

I don’t think you have to be a personal disaster to be a creative icon. But what do I know?

Since John’s alive (unlike, say, Freddie Mercury), these questions are askable. Reportedly John was so happy with Rocketman that he cried with joy to Egerton after his personal screening. I’d like to know specifically what parts gave him that joy. I just want to know if his life was/wasn’t that awful. 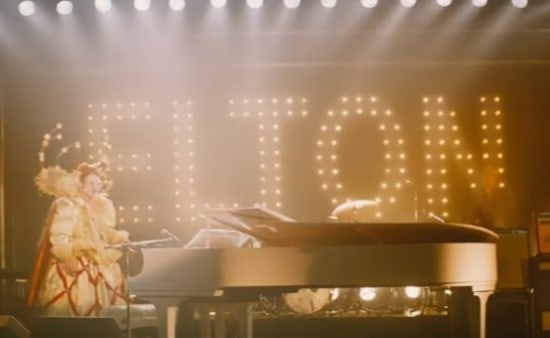 Our rocketman, in lights.

A friend told me no one wants to watch movies about creative happy people. I’d love to condemn that statement, but I’m also told I have an atypical POV on entertainment. I like to have a fun time at the theater. I want to go home feeling like a damn superhero. If I want turmoil and drama, there’s enough of that in the day-to-day. Or I could simply watch the news.

So, if you’re an emotional sponge who found A Star is Born and Bohemian Rhapsody dismaying, just stay home and watch all your favorite Elton John songs on You Tube. Eventually every cool musical performance by Egerton will appear too, so you can realistically catch 90% of Rocketman for free. (There were so many songs in Rocketman that finding even three non-musical minutes for Peetimes was a challenge.)

But should you see this? Almost every review of Rocketman RAVES on it. It’s super ingenious from start to end. Many sequences are  absolutely in the realm of fantasy, but somehow it all works flawlessly as a biopic. The flick is probably destined to become almost as iconic as the legend himself. Rocketman makes Bohemian Rhapsody look like a documentary.

I’m giving Rocketman a solid A for being so lovingly, thoughtfully, gorgeously made. It’s a remarkable film on many levels — not the least being the framing sequences with John’s outrageous demon costume slowly shedding away, as the inner man reveals himself.

If you can handle intense drug and suicide themes, you’ll enjoy this Elton John tribute. It’s also worth it just for catching Egerton’s performance: there will be awards, without a doubt.

Finally, I’m genuinely happy Elton John is alive to see his film — and if the credit notes are true, things worked out happily in the end.  🙂 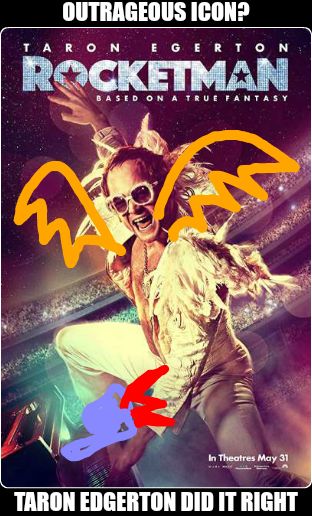 Fun with the RunPee #MovieMeme. Taron Egerton had literally big shoes to fill, but more than pulled it off in Rocketman.

About The Peetimes: As expected, this was a tough film to find Peetimes for, packed with iconic musical performances and hugely emotional scenes. The first 2 Peetimes are pretty good: I recommend the 2nd at 42 minutes — a nice long break. I avoided any major Elton John songs, as I assume these are what you came to see.

There are extra scenes during, or after, the end credits of Rocketman. (What we mean by Anything Extra.)

Rated (R) for language throughout, some drug use and sexual content
Genres: Biography, Drama, Music