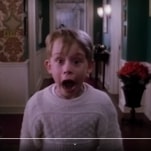 So I’ve been thinking about my favorite Christmas movie category – the ones I call Non-Christmas Christmas Films. This fun category includes such classics as Die Hard, Lethal Weapon, and Gremlins. Iron Man 3. Kiss Kiss Bang Bang. I have a useful list going here. But in that post, I ask if Home Alone deserves to be a full-on Christmas movie…or a movie that uses Christmas as a storytelling backdrop?

Home Alone ticks so many Christmas boxes: the trees, home lights, nativity, holiday mass, tons of snow. But it’s really not innately a Christmas movie; at least I don’t think so. There are no magical elements — no Santa, reindeer, Christmas wishes, elves, or misfit toys. No one meets ghosts or becomes a better person through the power of Christmas.

It’s not that kind of tale. Home Alone is a straightforward adventure story.

Besides the question of proper category, Home Alone is almost a perfect movie. It’s highly rewatchable, even for adults, even after all this time. I rewatched it with my mother last night and we were deeply impressed with young Macaulay Culkin. That skinny little kid carried a blockbuster film almost entirely on his back. Catherine O’Hara, John Heard, Joe Piscopo, John Candy — they were merely in the film.

This kid is the film.

Whatever Culkin has or hasn’t done since then isn’t important. 75% of the time, he’s acting purely against himself and whatever he’s messing with in the old McCallister house.

All other characters just help move the plot forward. But is the plot even important in Home Alone? It’s kind of like a kid version of Die Hard (in fact, it’s entirely Die Hard With A Kid), and so the plot…isn’t important. We’re here for the home-based hijinks and amusing John McClane-esque self-narration.

Everything really holds up well, year after holiday year. It’s engaging. It’s got enough plot to sort of make sense, is liberal with the humor, has a few great iconic moments, and lands with a sentimental heart.

The Real Stars of Home Alone

The score is perfect: which, of course, it would be, since it’s a John Williams contribution. You’ll recognize the main theme when you hear it again, even if you don’t think you will. (This is Williams’ superpower.)

Who else? It’s a John Hughes screenplay, the classic producer of such teen anthems as The Breakfast Club, Pretty In Pink, Ferris Bueller’s Day Off; you know the rest. Chris Colombus directs, the man behind the first two Harry Potter films. These are people who work well with kids. I’m surprised Spielberg wasn’t attached: this is right up his alley.

Keep the change, ya filthy animal!

Factoid for you. Did you know the violent black and white gangster flick Kevin watches isn’t a real film? It was created just for this movie, although most people think “Angels With Filthy Souls” exists. Truth. Look it up. I hear another “Angels” scene was shot for Home Alone 2: Lost in New York. I’ll be watching the sequel for the first time tonight and I’ll look for it.

I hear the sequel is quite good, and that everything else in the franchise is garbage. There are apparently six movies, including Home Sweet Home Alone, which came out this year. Six Home Alone movies, really? Okaaaaay…

Do yourself a favor and settle in for a Home Alone rewatch. I suggest ordering several boxes of pizza or making an impossibly big bowl of ice cream. Don’t forget to set your traps.

chevron_left What was the Merovingian ranting about in Matrix: Resurrections?
Christmas First View Review – An American Christmas Carol (1979) chevron_right