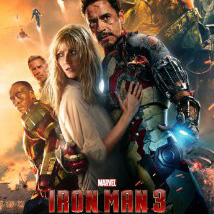 There is a lot to like about Iron Man 3, but, speaking for myself, not a lot to love. Where it falls short is that there’s never a moment where I feel that Iron Man won’t survive and save the day. Of course they’re not going to kill of Iron Man in a movie. You know going in that he wins. But the main threat that they’re going for in this movie, assuming you’ve seen the previews, is that Tony Stark is coming unraveled at the seems after the events in *The Avengers*.  That’s a good angle to take but, honestly, I never bought it. Not because I knew that in the end he would overcome his internal demons, but because I don’t feel that Robert Downey Jr. pulled it off. I’m not sure if it was the acting, or the directing or the script but Stark’s anxiety battle just didn’t seem real enough.

My grade for the acting would be a C+. It wasn’t great and it didn’t suck. Just average.


The story was, I thought, just so-so. It seemed a little contrived to me. I hope going forward they try a story that doesn’t involve Iron Man being attacked directly for something he did in his past. That theme has been picked over well enough in the first three movies now.

My grade for the story would be a C-.

There’s no question that the action carried this movie. There was lots of interesting additions to the Iron Man suit that were fun to see. I’ll leave it at that because I don’t want to give anything away.

Action grade is easily an A-.

Overall I’d give the movie a B-. The action is the only thing that pulls it out of mediocrity.

I just have one more thing to say, or to hint at, because I don’t want to offer up any spoilers, but I hate the way the movie ends. Not the final battle but what happens after that. Common, be daring. Have some fun with it.

And finally, don’t you just want to yell at the audience to sit in their seats after the movie is over? The after credit scene was probably the funniest part of the movie. Oh well, someday everyone will have the RunPee app and they’ll know when to stay and when to go. 🙂

chevron_left Is there anything extra during the end credits of Iron Man 3?
The Great Gatsby – movie review chevron_right