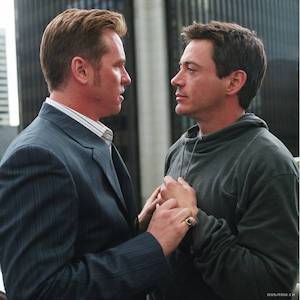 It seems odd, looking back on Kiss Kiss Bang Bang from this side of the first three phases of the Marvel Cinematic Universe — that it was touch and go whether or not Robert Downey Jr would get the lead role of Harry Lockhart.

At the time, RDJ was considered to be quite toxic

Robert Downey Jr was coming to the end of his very well publicised time spent using and abusing various illegal and legal substances. His career had been on the ascent throughout the eighties — to the extent of getting a best actor nomination for the title role in Chaplin in 1993; he lost to Al Pacino, which must give some indication of the talent on show.


The mid-nineties saw an increasingly chaotic lifestyle involving cocaine, heroin, marijuana, and alcohol, which led to a number of arrests, charges, and time spent in prison and rehab. When he got out, studios and producers were, understandably, loath to take a chance on him.

RDJ’s first job, post-rehab, was lip-synching for an Elton John video to go with I Want Love. Mel Gibson paid the insurance bond to pave the way for Downey Jr to appear in The Singing Detective. He then went on to appear in Gothika after producer Joel Silver withheld forty percent of his fee until after shooting wrapped, to offset the risk of relapse.

Working with Silver meant that Downey Jr was in the ideal position to argue his case for the lead in Kiss Kiss Bang Bang. Looking back from the comfort of the last month of 2021, it seems unusual that Robert Downey Jr had to fight for any role but, back then, Johnny Knoxville was up for the part and, when you consider that Knoxville was best known for Jackass at this time, that shows how low RDJ’s stock actually was.

When In Doubt, Cut Up A Pig

So, what is Kiss Kiss Bang Bang all about? Short and sweet… small-time crook accidentally wanders into a film audition, gets the part, and finds himself whisked off to Los Angeles. While there, he finds himself embroiled in a Chandleresque romp after being sent to learn how to be a detective by shadowing a detective.

Chandleresque is a reasonable adjective to use, as writer/director Shane Black read several Raymond Chandler detective novels while working on the screenplay. Kiss Kiss Bang Bang is split into a number of chapters and those chapters are named after Chandler novels: 1. “Trouble is My Business”, 2. “The Lady in the Lake”, 3. “The Little Sister”, 4. “The Simple Art of Murder”, and Epilogue: “Farewell, My Lovely”.

It also shares a certain hard-bitten humour that typified the film noir classics from the forties and fifties.

It Was Neck-And-Neck And Then She Skipped Lunch

I suppose the next stage for this little article is to decide whether or not we’re dealing with a Christmas film, or just a film set at Christmas. Ultimately, like all this sort of thing, it depends who you ask. An article in LA Magazine said, “Kiss Kiss Bang Bang is a quintessential LA Christmas movie”. Their argument centers on the fact that Harry goes from scumbag to saint…sort of. He goes from stealing from people to helping them, which is hardly a road to Damascus, so I think the article is saying more about Christmas in LA than Christmas per se.

It doesn’t stop Kiss Kiss Bang Bang being a cracking little film, though

Shane Black has a theory that audience members lose their attention span every 28 minutes and moments have to come in every half hour or so, where they don’t have to pay close attention and are able to get focused again. As a result, you can be sure that a Shane Black film isn’t going to be a long, dull affair!

chevron_left Is there anything extra during the end credits of Don’t Look Up?
Movie Review – West Side Story chevron_right