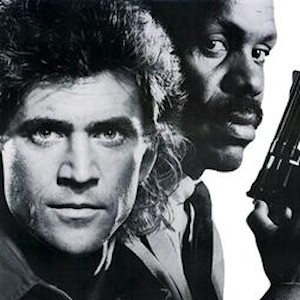 What better way to start a Christmas film than with a half naked, drugged up prostitute pitching headfirst off the balcony of a tower block? If that doesn’t say festive fun and frolics, well, I don’t know what does! After all… Jingle Bell Rock is playing on the sound track. Throw into the mix a man coming to terms with his advancing years, a drug bust with a high body count, and a near suicide, and you have a pretty full opening quarter hour.

Seriously though, Lethal Weapon has a lot more going for its Christmas credentials than, say — plucking a name at random — Die Hard. While both films are set at an unspecified time during the run up to the holiday, one takes place over a couple of hours, but the other runs for days, which gives the whole “path to redemption via friendship and family” time to run its course.

Lethal Weapon is the story of Martin Riggs (Mel Gibson). After his wife is killed, he starts to develop suicidal tendencies. This leads to him taking out his aggression on his suspects which, being ex special forces, is a lot of aggression. As a result, he gets moved from narcotics to homicide, following his boss thinking he’s faking to get a psychiatric discharge. He gets paired up with family man Roger Murtagh (Danny Glover), who’s just turned fifty.

Before long they get caught up in a case involving mercenaries, heroin, and the sky diving hooker from the opening scene. This brings the murder and mayhem into Roger’s home, and fun and frolics ensue. Well… more murder and mayhem if I’m honest. The majority of it organised by General McAllister (Mitchell Ryan), but implemented by Mr Joshua (Gary Busey, at his psychotic best).

Anyway… fights, shooting, more fights, more shooting, up until the last big shoot up and fight when the good guys finally win.

I’m Too Old For This Shit

So what makes Lethal Weapon more of a Christmas movie than Die Hard? Despite or, more likely, because of the warm, cozy, family centered aspects of Christmas, it is a time when people who are vulnerable or close to it are tempted or tormented by thoughts of suicide; enter Martin Riggs.

Mel Gibson at this time was young (thirty years old) and fresh faced, even managing to pull off a fluffy mullet. This was years before he grew a shaggy beard and became a foul mouthed old anti-Semite, so to see him playing a man on the very brink of taking his own life, and playing it so well, does come as an abrupt volte-face in this rollicking roller coaster of a film.

Throw in the main cause of his redemption being the acceptance into a loving family and finding a new friend, which leads to him finding a sense of belonging and a new found love of life… it’s a Christmas miracle! He is one step away from a George Bailey level of rediscovery! Hell… him and his dog even end up coming over for Christmas dinner.

So, to my mind, way more of a Christmas film than Die Hard. There’s no snow in Lethal Weapon — but we are in LA!