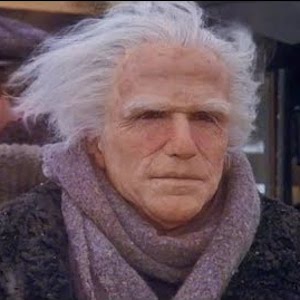 Here we have an attempt to prove the ubiquity and relevance of Dickens’ A Christmas Carol by taking it from Victorian-era London and plonking it down in Depression-era Concord, New Hampshire. I don’t if there’s any significance in the location but the time has obviously been chosen as one of widespread poverty, debt, and hardship. And, as we all know, when poor people are struggling there are rich people lending money at exorbitant rates.

Despite the hardship, it’s still nearly Christmas and children still want to play and sing carols. People are still collecting for those less fortunate than themselves. The rich money lenders are out making sure that there’s no shortage of people less fortunate than themselves. And what do miserable people do on Christmas Eve? They go around spreading their misery far and wide.


And, in An American Christmas Carol, the richest, most miserable man in town is Benedict Slade (Henry Winkler). He is reluctantly assisted by John Thatcher (Chris Cragg) as they drive around town with a stack of repossession notices, a large burly helper, and a van.  So Slade and Thatcher are Scrooge and Cratchit, Fezziwig is Nathanial Brewster (Chris Wiggins), Concord is London and we’ve got a few other differences to address…

For a start, Slade is found as an orphan whereas Scrooge was packed off to boarding school. Brewster comes along and plucks Slade out of the orphanage, sets him up in his factory, his home, and, indirectly, his daughter, Helen (Susan Hogan). Like Fezziwig, Brewster was a kind man who took care of his employees. The few pounds/dollars spent on a big Christmas party was worth it when you could see how happy it made everyone. But I don’t think Slade was anywhere near as bad as Scrooge.

Scrooge lost out on family and friendship because he decides to go off and make money rather than earn less and love more, but I got the feeling that Slade lost out due to frustration. Brewster was a traditionalist and couldn’t see that the world was changing. Slade comes to him with advice about how to improve his business, twice, but gets rebuffed, twice! Slade can see that Brewster’s business days are numbered and jumps ship. He says he’ll come back for Helen but never does.

Another difference in An American Christmas Carol is the whole visitation thing. In this version, Jacob Marley is Jack Latham (Ken Pogue) and he is, as is traditional, the first ghost that we meet. Unlike Marley, however, the ghostly version of Latham isn’t weighed down by wearing the chains forged in life. As he said, “I made it link by link and yard by yard; I girded it on of my own free will, and of my own free will I wore it.” Latham is sitting in a nice high-backed leather chair with not so much as a chain link in sight.

The other ghosts are a bit more problematic. Whereas all the other versions feature totally unknown visions, the ghosts in An American Christmas Carol are not only characters we’ve seen earlier on but also still actually alive.

At first, this is a bit confusing for both Slade and the viewer. At the beginning of the film it’s Christmas Eve, and Slade and Thatcher are driving around, issuing repossession notices, and claiming back everything that people had fallen behind on their payments for.

Ultimately, An American Christmas Carol is a vehicle for Henry Winkler. It was made about halfway through the run of Happy Days so, at the time, he was a very big name.

But I couldn’t help wondering why. Previous and future portrayals of Scrooge have always used a number of actors to show the character at different stages of life; boy, young man, and old man. Usually, it has been three actors for the three ages. This film only used two; a young boy and Henry Winkler. This means that Henry Winkler is in monumentally thick “old man” make up for three quarters of the film, and appears as himself for about twenty minutes.

Groundhog Day Themed Mouse Movie – Mickey’s Once Upon A Christmas