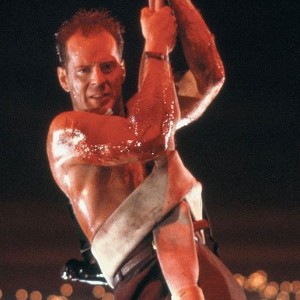 Die Hard is, without doubt, a cracking action film. A Christmas film though? Well, it has a weary traveller, a pregnant woman, gifts, and celebrates the value of family and the spirit of friendship. Add to those the soundtrack, the fact it takes place at an office party (a real one, mind, one with a jerk that no-one likes), ingenious use of Christmas tape, and a toy Santa used to make a point when the first killed terrorist is given a Christmas hat off the plastic Santa — with a “Ho Ho Ho” message. If all the blood, sweat, aggression, murder, and mayhem doesn’t make you think of shopping on Christmas Eve, then you’re probably not doing it with the appropriate level of commitment and enthusiasm.

So we here at RunPee Towers favour the “Die Hard is a Christmas film,” and that sentiment is shared by 20th Century Fox (when they made a new trailer for the 30th anniversary edition) — but not by Bruce Willis (“It’s not a Christmas Movie, it’s a Bruce Willis movie” – July 2018).


There are also more ludicrous claims to be made; Die Hard is an architecture film, or Die Hard is a Playboy film. Both of those topics have three pointers to being an accurate label, alongside Christmas.

Die Hard is, for the benefit of the two people who haven’t seen it, an action/thriller set in a confined space… the top few floors of an office block. John McClane is an NYPD cop travelling to the west coast, where his estranged wife is now working, for a family Christmas. He turns up the office Christmas party at roughly the same time as a group of robbers posing as terrorists. The bad guys are there to steal the $600 million in bearer bonds in the Nakatomi vaults.

John arrives feeling a bit sticky after his journey and is having a wipe down when the terrorists/robbers make their presence known. Since he is “au toilette” at the time, he is barefoot and in his vest… the barefoot bit becomes relevant later on. Despite his sartorial handicaps, he manages to set about the baddies and gradually whittles them down to a least imposing force and, ultimately, saves the day.

Summed up in a few sentences like that, Die Hard doesn’t seem very much, but it has gone on to resonate over the years. Deemed “culturally, historically, or aesthetically significant” by the United States Library of Congress, the film was selected for preservation in the National Film Registry in 2017.

It was a launchpad for both Bruce Willis and Alan Rickman; Willis was known as a TV star, while Rickman was more at home in the theatre. It was nominated for four technical Oscars but was unlucky enough to be up against Who Framed Roger Rabbit? It’s even become a shorthand for other films… it’s like Die Hard on a plane, Die Hard on a train, Die Hard in space, etc. Just say that and you get an idea of what’s going to happen.

Could It Have Been Different?

It very nearly was! Going from the source novels, Die Hard is a sequel to The Detective (1968) which starred Frank Sinatra. Sinatra was offered the lead but, being seventy three, turned it down… Yippee-my-way, motherfucker?

Clint Eastwood had the rights for a while and was going to do something in the early eighties, but that came to nought. Then it was envisioned as a sequel to Commando and Arnold Schwarzenegger was lined up, until it went in another direction. It was pitched as “Rambo in an office block,” so Sylvester Stallone was thought of.

So, while it seems that it could only have been made one way, it could have been a very different beast altogether!

chevron_left The Big List of Movie Updates for 2021 and Beyond
Is there anything extra during the end credits of Wonder Woman 1984? chevron_right