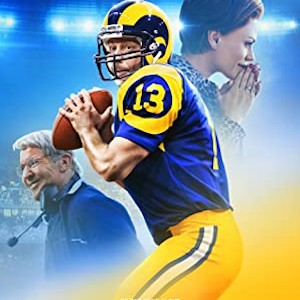 As a football fan, it was fun watching this movie. I’ve known the basics of Kurt Warner’s story for a long time. I’ve been playing fantasy football since the mid-90s and I distinctly remember Trent Green getting injured, and I vividly recall the Dick Vermeil’s—Ram’s head coach—impassioned press conference that followed.

The football action is pretty good. A big bonus is that they show actual game footage of Kurt’s NFL career in spots. That was a real treat.


I don’t think football fans will be disappointed watching this movie. It won’t go down as one of the classic sports movies. But it’s quite enjoyable nonetheless.

But the reason this movie was made is that it’s a faith-based movie that explores how faith inspired a man to achieve his full potential. Something I’ve noticed in most faith-based movies, especially the really good ones, is that they don’t make the story revolve around God/Church. It’s only part of the setting, just like where a movie takes place. The role faith played in Kurt’s life is acknowledged, but it doesn’t become the main plot.

Just as much time is spent on Kurt learning to trust his offensive line and throw the ball quickly.

In my opinion, the faith-based message takes a back seat to the football action, and also the dedication Kurt had to the step-kids he accepted responsibility for. That had little to do with faith and speaks more to Kurt’s character than any of his football accomplishments.

About The Peetimes: I would recommend the 2nd Peetime. You’ll miss a little football action, but not too much. Most of it comes later in the movie. The 3rd Peetime is for emergencies only.

There are extra scenes during, or after, the end credits of American Underdog. (What we mean by Anything Extra.)

Plot
American Underdog tells the inspirational true story of Kurt Warner (Zachary Levi), who went from a stockboy at a grocery store to a two-time NFL MVP, Super Bowl champion, and Hall of Fame quarterback. The film centers on Warner’s unique story and years of challenges and setbacks that could have derailed his aspirations to become an NFL player – but just when his dreams seemed all but out of reach, it is only with the support of his wife, Brenda (Anna Paquin) and the encouragement of his family, coaches, and teammates that Warner perseveres and finds the strength to show the world the champion that he already is.

chevron_left Christmas First View Review – An American Christmas Carol (1979)
Is there anything extra during the end credits of American Underdog? chevron_right