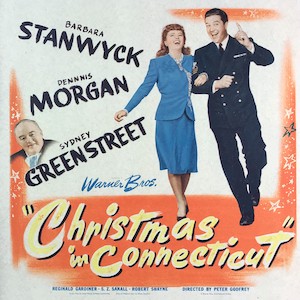 I’ll admit that this was a total surprise. As is rapidly becoming traditional, here in RunPee Towers, this time of year means that there are Christmas films to be watched.  We do try and get other themes going for other holidays but, as a lot of them are unheard of outside of the USA, I tend to leave them to other members of the team. Now there’s not much point reviewing the same films year in and year out, so I like to have a trawl through the four thousand or so films that I have access to and find something different.

That’s how I came across Christmas In Connecticut. Now I’ve probably passed over many suitable holiday films because they don’t have “Christmas” in the title but, I promise, I’m going to try and get things better organised before next year rolls around.


Anyway, I was scrolling through the 1940’s file and spotted Christmas In Connecticut and thought “Bingo! That’ll do nicely.” At this point it was only a title in the 1945 folder so it could have been anything. It turned out to be a nice, frothy rom-com with a bit more rom than com, but not doing too badly in either camp.

Catastrophe, What Is It?

Christmas In Connecticut is the story of a magazine columnist named Elizabeth Lane (Barbara Stanwyck) who writes articles about her idyllic life on her charming Connecticut farm with her loving, handsome husband and adorable children. She writes about her blissful country lifestyle, the marvellous meals cooked with fresh ingredients, and even the loveable cow, Macushla. Elizabeth Lane’s lifestyle and recipes are admired by housewives all across the United States.

There’s only one teeny, tiny problem…none of it is true. And, as is the way of the cinema world in general and rom-com scripts in particular, things are going to rapidly unravel.

In actuality, Elizabeth is a singleton living in a New York flat who struggles to make toast without detailed instructions. All her recipes come her uncle Felix (SZ Sakall), who is a chef in a fancy restaurant. The farm, cow, children, and husband all come from her fertile imagination. The deceit goes swimmingly for ages until a shipwrecked sailor, Quartermaster Jefferson Jones (Dennis Morgan) recovers in hospital by imagining eating her wonderful food. One of the nurses takes pity on him and writes to the magazine publisher, Alexander Yardley (Sydney Greenstreet) who arranges a special Christmas treat for the war hero.

Fortunately, Elizabeth’s friend, John Sloan (Reginald Gardiner), has a farm in Connecticut and is prepared to marry her. He even has a sideline as a babyminder so they can mock up the complete family. By dragging along uncle Felix she can even fake the cordon bleu cooking. So everything should go swimmingly…yes? Of course not! Elizabeth is supposed to be one of the best cooks in the country so, unsurprisingly, they want to watch her cook. They can’t understand why she seems so reluctant to go in the kitchen, let alone to have them watch her.

The last piece of the puzzle is to get married so Elizabeth and John can share the same bedroom…this is 1945, remember. So the judge keeps popping in and out, but circumstances dictate that the ceremony can’t happen. This proves to be not such a big deal for Elizabeth when Jefferson appears and she finds him particularly toothsome.

I’ll stop there in a vague effort to avoid spoilers but, being realistic, you’ll know how it ends. I’ll just finish by saying how ahead of things Warner Brothers were with their recycling program; John Sloan’s Connecticut home was originally used for Bringing Up Baby, and Barbara Stanwyck’s fur coat was originally worn by Joan Crawford in Mildred Pierce.