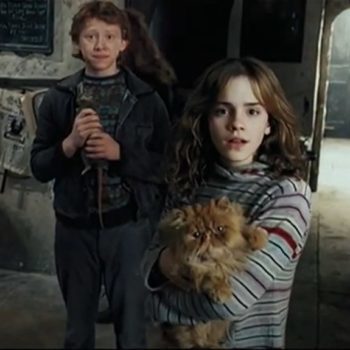 What is it about cats who are orange — and the movies? Especially in major, iconic science fiction and fantasy film franchises? It must be a ginger thing.

There are mild movie spoilers here. But these aren’t new films, so all should be right in the universe. Further disclaimer: no curiosity killed any cat in the making of these motion pictures.


Here are the top six ginger kitties in iconic films:

Goose the Cat, in the MCU’s Captain Marvel, is not really a cat. But the Flerkens and Kneazles in this article sure look like cuddly red kitties. Goose is also a hero, albeit a very dangerous one, and even if you make nice to him you may lose an eye. The price one must pay to keep the Tesseract (temporarily) safe in a pocket universe?

Jones probably started off as the Nostromo’s mascot in the finest tradition of sailing ships, who employed felines to catch vermin. Unfortunately, the alien in question was too big to hunt. Maybe they should have brought a tiger onboard.

One thing I appreciated was the alien’s curiosity about Jonesy, as it looks into the cat’s travel case in puzzlement. This is one of the few times we see some personality in the deadly species. Clearly, it doesn’t find the cat a suitable source of meat or host material. I personally always thought it recognized a fellow predator.

Okay, there’s another cat-related moment that’s cool: Ripley goes back for Jones. She risks her life to get his carrier, when she was more or less safe already. If for nothing else, by this one heroic act Ripley deserves to make it out alive.

Ask yourself: would you have gone back for a cat after seeing all your crewmates die most horrible deaths?

Jonesy gets a nice cameo in the Aliens sequel. Ripley smartly leaves him home in this one, which begs the question: what happened to Jones after Ripley heads for the ill-fated Sulaco? More story must be told!

(PS: I’ve decided Jonesy is a Flerken. That Xenomorph got off EASY.)

He’s super furry and probably not entirely feline. Crookshanks was hinted to be at least half-Kneazle in the Harry Potter novels. He’s also smart enough to figure out that the rat who sleeps with young Ron is not who he seems. And this makes Wormtail’s role all the more creepy. (I still can’t believe he was sorted into Gryffindor!)

Orion in the original Men in Black is a tabby mix, but a reddish one. He counts. And while his inclusion in the film seems incidental at the time, in a clever play on words, Orion is the lynchpin to deciphering the intergalactic mystery. Seems obvious in retrospect. I think we were too distracted by Frank the Pug to give this kitty his due.

Moreover, since Orion is from outer space, no one can be sure he’s actually a cat. Could be another Flerken. Kneazle. Whatever.

I never imagined Puss as a marmalade Casanova, but he’s assuredly swashbuckling in the amusing Shrek franchise. This cat is so cool he got his own eponymous film in the same fairy-tale universe.

Spot – Star Trek: The Next Generation

Data’s pet tabby in Star Trek: the Next Generation is gender-fluid. Spot is frequently referred to as “he” in his recurring role, even though he had a litter of kittens. So chalk one up for feline gender equality. There’s some species fluidity, too: Spot turned into a lizard once.

He’s also the android’s creative muse, as the subject of Data’s seminal Ode To Spot. Which is hysterical.

Spot mostly appeared on The Next Generation during the TV show run, but Spot did make a touching cameo on Star Trek: Generations. He also had a quick moment in Nemesis where prototype Soong-type android B-4 pets him. So we’re good as far as sci-fi movie franchises. Felis Catus, indeed.

Why are these red cats all boys?

Of the six marmalade movie moguls listed here, all are male (except when Spot is female). This aligns with real life: only one in five orange cats are female, due to a sex-linked X chromosome gene. (I once had a male red cat I named John Crichton — which has nothing to do with cats or ginger hair — but if you know what sci-fi series I’m referencing then we can be friends.)

Do you have a favorite movie kitty? Can you think of any sci-fi or fantasy ginger cats that I missed?

If you have feral cat problem here’s a good resource to help repel them.

All Men In Black Films, Ranked

chevron_left Is there anything extra during the end credits of Together Together?
Indie Movie Review – The Inheritance chevron_right