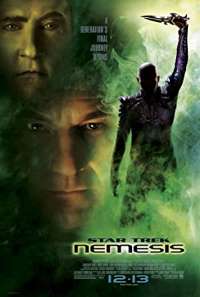 I haven’t finished my Star Trek franchise rewatch yet, but I’m pretty sure this is the worst stinker in the 13 movie run. I was pleasantly surprised by most of The Final Frontier being better than I remembered. And while I need to rewatch Into Darkness to see how it fared over time in comparison, Nemesis is just not a pleasant Trek experience. It’s a poor way to retire the fabulous Next Generation crew.

Plot (Spoilers)
After a joyous wedding between William Riker and Deanna Troi, Captain Picard and the Enterprise crew stumble upon a mysterious signal — a prototype android version of Data. The Enterprise is invited to Romulus to negotiate peace with the Romulans by their new Praetor, Shinzon. Shinzon is revealed to be a clone of Picard, raised on Remus, a slave planet to the Romulans. Picard discovers this peace treaty was nothing more than a set-up — Shinzon needs Picard in order to survive. But little do the Enterprise crew know Shinzon also plans to do away with the Federation, by unleashing a weapon that could destroy a whole planet.

It’s too bad a series of good moments does not a good movie make. But I’ll run through them here:


The point is that Data’s emotions are there to see if you’re looking for it and you’re a fan, so yay for small favors. I would have cut out some of the endless action in favor of more character development/resolution.

More goodness to look for on your rewatch

The Picard and Data Action Show

TNG was initially an ensemble. After the first season, the acting chops of Patrick Stewart made the writers stand up and take notice, and more plots revolved around him. It quickly became less about the Riker character, who was supposed to be the action hero while the captain stayed on the bridge. The burgeoning popularity of Data, paired with Brent Spinder’s seeming ability to have chemistry with anyone, led to more and more shows about either Picard or Data and sometimes both.

By the time the movies kicked off, Picard somehow morphed into an action hero, with Data as his sidekick. The other actors had to make do in the movies with leftovers (or in the case of Dr. Crusher, sometimes nothing at all). Picard is supposed to be the quintessential Rennaisance Man. That’s his whole inspiring and timeless appeal. In the film franshise, it seemed like Patrick Stewart wanted to have fistfights, firefights, and ridiculous dune buggy chases…and less Picard speechifying.

I suppose if you want Stewart in your movies, you do as he asks.

A Clone is a Twin

I feel bad for Tom Hardy (as Shinzon). He really tries to sound and move like Jean-Luc, but it doesn’t work. He doesn’t look like a younger twin — which is what a clone is. They even broke the series continuity by en-baldening Hardy. Sorry, it still doesn’t make him look like Patrick Stewart. They might have done better by re-using James McAvoy, but that might just too much meta to exist. 😉

I really don’t want to go into all the worst elements of Star Trek: Nemesis, because this article is long enough and you’ve probably heard it all before. But I’m going to do something for the first time and give you a Peetime for free: run to the loo when you see Counselor Troi brushing her hair in the quarters she shares with new hubby Riker. She’s about to be raped. It’s a miserable scene, even if it does give Marina Sirtis something to do in a Trek film.

We’ve seen Troi mentally assaulted many, many times (‘Violations’, ‘The Survivors’, and ‘Man of the People’ comes immediately to mind), but this one includes an actual physical rape component as well. It’s incomprehensible. Why does a Star Trek movie see fit to put this kind of human ugliness on the large screen?

It also implies Picard himself has a thing for Troi (which I personally believe is the case after a recent rewatch of “The Devil’s Due” — but that’s done in a way that doesn’t demean either character and shows his respect for her more than anything else).

I get it: Shinzon’s never seen a human female before (“May I touch your hair?” he asks — also, again, BALD), and that he’s revulsed when a Romulan female offers herself up (“You’re not a woman…Touch me again and I’ll kill you.”). But Nemesis could have delved further into his trauma and removed some of the endless, pointless action scenes. The kid has never been with a woman. Okay. He’s immediately attracted to Troi, which, sure. Hormones. Why not have more character moments instead of showing an actual rape in ‘glorious’ detail? Was this movie directed by a repressed 12-year-old?

It’s a serviceable science fiction film, which is why Nemesis just squeaks into the C range. But it’s not good Star Trek. Trek can be — and sometimes is — dark, but it should fill the rest of the screen time with resonance about the human condition. It’s also a bait and switch about the Romulans. It seems to be a plot about the Romulan Star Empire, which is long overdue. Instead, we get a new species, the Remans. (Who, by the way, look like Nosferatu vampires.) We’ve heard about the planet Remus, a twin planet to Romulus, but never saw it. This sort of works as a theme of twins — Romulus and Remus, Shinzon and Picard, Data and B-4 — yet doesn’t really do anything interesting with the concept.

Then, what they do with Data in the end…just, why? The film series ends on such a sour note that Trek had to be rebooted in 2009. We — and this crew — deserved better.

Fortunately, there IS a better farewell.

Watch these Next Generation episodes instead of Nemesis

Want to see Picard wrestle with the road not taken in a superior way? The episode “Tapestry” in Season 6 of The Next Generation is one of the best in Trek.

And a far, far better TNG finale and crew send-off is Season 7’s “All Good Things.” You can take the same amount of time from your day to watch both episodes instead of the movie, but don’t blame me if you get something in your eye by the end. 😉

About The Peetimes: I have an excellent Peetime for you that also serves as an Alert, pulling double duty.

There are no extra scenes during, or after, the end credits of Star Trek: Nemesis. (What we mean by Anything Extra.)

chevron_left Is there anything extra during the end credits of Dream Horse?
RunPee Weekly Newsletter #63 (May 26th, 2021) chevron_right