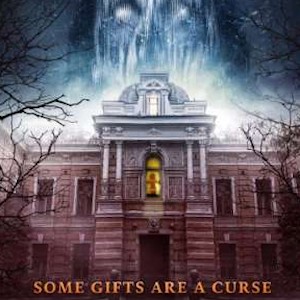 I’ll be honest, The Inheritance left me more than somewhat confused. The story, such as it is, revolves around Sasha (Natalia Ryumina) and Peter (Nick Wittman), who are living in Chicago. Sasha hears her father has died and she inherited everything.

Everything includes a rather spiffing house in the centre of Kyiv, capital of the Ukraine, and, to be honest, I never picked up what else — mainly because the filmmakers didn’t seem to want to share with us the full terms of Yuri Makarenko’s last will and testament.


One minute Sasha is looking through a box of old photos, and the next she is in a taxi heading towards 44 O. ГОНЧАРА…or 44 Gonchara Street.

Their arrival is a bit like those you used to see in old westerns… they step out of the cab and everyone in the street stops whatever they’re doing and stares at them.

Inside, things start to get a little strange and not only with the introduction of Anjelica, the housekeeper (Larisa Bokovenko). She helps them settle in by removing the dust sheets, leaving a box of groceries, a fridge full of booze, and steadfastly refusing to answer questions like, “Why won’t anyone live in this house?”

There are also some insights into the fragility of Sasha and Peter’s marriage; Peter takes a first look around the huge vestibule and says, “Wow! All this, and all ours.” Sasha replies with, “You mean mine…but I share”.

I Think They’re The Neighbourhood Watch

So, in part, The Inheritance turns out to be this huge house which I think it would be safe to describe as an inner city mansion; the phrase “rattling around like peas in a drum” was never more appropriate.

Then up pops Roman Volkov (Yuriy Dyak), is a solicitor handling the assumed sale. He turns up with a load of documents printed in Cyrillic and expects Sasha to just sign them. Interestingly, so does Peter. She seems less than keen to sign, which is understandable as she could be underwriting a Ukrainian dating agency, but also is undecided on the enormous palace.

To be honest, I’m with Roman and Peter. I don’t know why Sasha wants to keep the house, as the only previous connection is a few old, curled up photos. It’s surrounded by huge, threatening men, and she keeps having strange dreams and hearing weird noises. Throw in that her current life, friends, and work are on the other side of the planet and she’ll have one hell of a commute if she goes ahead and stays.

From this point on the story swings to and fro between a haunted house story, a murder mystery, and a plot to get hold of Yuri Makarenko’s property and assets.

Again, I’ll be honest and say I used my usual technique and watched The Inheritance several times over a couple of days while I prepared and wrote this review, and I still couldn’t say exactly what happened.

To paraphrase The Clash, does she stay or does she go? Who’s side are all those thuggish looking men on? What other assets are there to keep her living in an undoubtedly beautiful house just two hours drive from Чорнобиль… bet you can guess where that is!

Meantime, I thought it was well acted particularly by the Russian/Ukranian cast members. Also, the music worked very well keeping the atmosphere going, and that house…if I could pick it up and plonk it overlooking the beach near my house I would do so in a heartbeat.