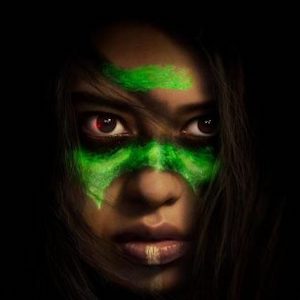 Ah, 1987…I remember it well. I am one of those people that, when someone mentions the eighties, thinks “that’s about ten years ago”. I have to have a sit down when I realise it’s actually over thirty years ago. Back then I was, like a lot of people, on an Arnie high; The Terminator was a simply perfect sci-fi action film, Commando was simply bonkers but a thrill ride, Raw Deal was a bit thin but still watchable. I was ready for the next mad, macho Arnie outing.

And so we got Predator which was, quite frankly, awesome. All right it might be a bit cheesy when Arnie flexes his ad-lib muscle.  “Stick around” he says after pinning a bad guy to a hut with a knife that looks like it was made from a scythe. It starts off as one thing but finishes as another. The first half hour is a tale about a group of commandos being sent into the jungle to sort out a group of bad guys. But then things take a change of direction as the eponymous Predator makes its presence known.

We end up with a film about a group of grizzled, combat veterans taking on an alien version of a big game hunter and not doing too well. From then there came the inevitable sequels which led to a whole franchise, some better than others. I suppose it was only a matter of time before a prequel was in the offing and, sure enough, that’s what we’ve got in Prey. It hasn’t had a theatrical release but that is more down to changed attitudes thanks to Covid rather than the quality of the film.

Prey is set on The Great Plains of America in 1719. Obviously, we all know what we’re dealing with by now…well, what they’re dealing with anyway! This time around, “they” are a group of Comanche who are just going about living their lives. One day Naru (Amber Midthunder), a healer who wants to be a hunter, sees what she thinks is a thunderbird but its actually the predator being dropped off.

So it’s over three hundred years ago. It could be possible that the Hish-Qu-Ten were just as advanced back then as they were in 1987. But that would make life unnecessarily difficult for a small group of eighteenth century American Indians. It’s a much more realistic approach to give the actual predator an older look too. So the weaponry and armour are much more simple than we’ve seen in other episodes of the franchise.

Get To The Chopper

What’s not to be underestimated is the fighting spirit and resourcefulness of a Comanche hunting party. Especially when they have Naru among the ranks. She may only be 5’5” compared to Arnie’s 6’2” but, following the death of 7’2” Kevin Peter Hall, the current predator is played by Dane DiLiegro at a teeny 6’9”. There are plenty of nods to earlier episodes. When the predator is wounded and the neon green blood is found the line “If it bleeds, we can kill it” is spoken. Similarly both Naru and Dutch Schaefer taunt the beast by saying “C’mon…c’mon do it, do it now”. Also they both hid from the monster by lowering their body heat. Dutch by getting slathered in mud, Naru by using a herbal anti-inflammatory.

Incidentally, there is a nod to the mud scene in Prey as well. I’ll not say too much but, as soon as you see the swamp, you’re expecting a predator to wander by without seeing anyone! Another throwback is when Naru’s brother Taabe (Dakota Beavers) is tortured. He gets cut diagonally across his chest in the same way that Billy (Sonny Landham) cuts himself before facing the beast. I may be overthinking things by now but there is a scene which has a cigar in it. To be honest though, it was much thinner than Arnie is used to. The original has a line about the woman they rescue, Anna (Elpidia Carrillo), being on a leash. Naru has developed a method of fighting using a tomahawk on a leash.

I Ain’t Got Time To Bleed

There is a connection to 1990’s Predator 2. At the end, Lt Mike Harrigan (Danny Glover) is awarded a gun by an elder Hish-Qu-Ten. This is a flintlock pistol engraved with “Raphael Adolini 1715”. In Prey we get to see the same pistol being given to Naru in return for medical assistance. One has to assume that the man handing over the pistol is none other than Raphael Adolini (Bennett Taylor). How it ends up back with the Hish-Qu-Ten isn’t mentioned but the end credits do show a hide painting which seems to show three predator space ships arriving in Comanche territory…

All in all, I thought Prey was a marvellous addition to the franchise. I’ve heard complaints about it being woke or unrealistic because it is a woman who defeats the Predator but they seem to forget that The Terminator was defeated by Sarah Connor and the Xenomorph regularly got a kicking by Ellen Ripley. I guess some people just don’t like the idea of strong, capable women winning the day.

Documentary Review – The Beatles: Get Back

chevron_left Is there anything extra during the end credits of Bodies Bodies Bodies?
Movie Review – Emily the Criminal chevron_right