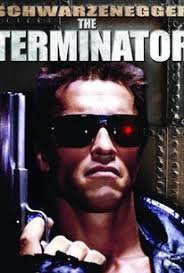 The Terminator is one of the truly perfect films in the science fiction genre. Sure, there are temporal paradox/causality loop issues, but you have to handwave that and go along with the premise. And why not? If you’re going to tell a time travel story about what happens when the singularity occurs — and it turns out AI cyborgs decide to eradicate Man — it doesn’t get better than this. Argue all you like, Asimov fans. 😉

This is heart-pounding action with a bit of sweet, wistful romance, some humor, magnificent chase scenes, a great urban 1980s setting, fatal mistakes by a rookie Sarah Connor, sardonic wisdom from the young, war-hardened time traveler, and a really scary unstoppable killing machine.

Everyone showed a spirited commitment to their unlikely roles. There are some interesting early ‘cameos’, like Bill Paxton as a young punk. I still have a crush on Michael Biehn’s Kyle Reese (who played the equally awesome but essentially same character in the fantastically-scary-but-delicious Aliens film), and Linda Hamilton will always be my Sarah Connor. Finally, Arnold, as the Terminator, was a revelation (his entire acting and subsequent political career really kicked off right here).


Some lines might be hokey to modern ears, but I love it all, after all this time, and quote them in daily life. (Here’s three quotes, offhand: “Come with me if you want to live.” “That’s what he does! That’s ALL he does!… And he absolutely will not stop…ever, until you are dead!” And, of course, “I’ll be back.” Duh.)

There’s also an interestingly mechanized score by Brad Fiedel, with the subtle thrumming theme of the Terminator lingering as an iconic sound, recognizable through the entire franchise. (We can debate the various merits of the other Terminator movies/TV shows in the comments section below.)

When the exoskeletal version of the T-800 rises from the flames, it’s a horrifying moment. (Although, if you were aware at all of James Cameron movies, you would expect his signature ‘fake-out’ endings. But hey, they do work.) The scene where a wounded Sarah kills the crawling death robot is gripping, chilling, and deeply satisfying. (“You’re terminated, [email protected]” Yeah.)

The final moment in Mexico is superbly understated, ominous, frightening, and strangely hopeful. “There’s a storm coming.” “I know.” And now I have goosebumps. An enduring film, worthy of RunPee’s Classic Movie Hits List.