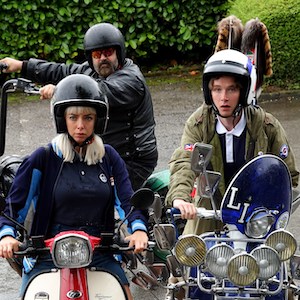 Believe it or believe it not, I am of an age whereby the phrase “Are you a mod or a rocker?” was more of a threat than a curious inquiry. Quite simply, if you gave the wrong answer you would be introduced to a world of pain. It was one of those questions used to determine which tribe you belong to; Liverpool or Everton, Protestant or Catholic, Socialist or selfish…to paraphrase the late, great Willie Rushton you’re allowed to be biased in your own articles.

Though it may have died down now, I do remember when the conflict between mods and rockers was, quite literally, front-page news and led to questions in parliament.


Being aware of — and being part of — are two different things though. I guess I turned out to be a blend of the two. I’ve never ridden a scooter but I have owned motorbikes. I preferred the music of The Who, The Yardbirds, and The Small Faces, to Eddie Cochran, Gene Vincent, or Bo Diddley. Over the years I’ve owned both parkas and leathers.

Perhaps I lack commitment, perhaps I can see both sides of the arguments, perhaps I just don’t want to end up backed into a corner. Would I be able to find any affinity with The Pebble And The Boy? Let’s see, shall we…

You Can’t Live A Lie; You Have To Follow Your Heart

The Pebble And The Boy starts with a funeral…a mod funeral. Scooters festooned with mirrors and lights, and people wearing parkas abound. Underneath the parkas are some sharply dressed men and women who form up behind the hearse. The funeral is for Phil, John’s father, who was killed when he hit a bus while riding his beloved scooter. Fortunately for John (Patrick McNamee) he’s been left his father’s house, his mother (Christine Tremarco) having moved on and remarried. While looking around his new home, he discovers just how entrenched in mod culture his father was. I can relate to the looking around bit; I’m sure my daughter’s got her plans for my house fully formulated.

The next day there’s a delivery…from the police compound. It’s the scooter his father died on, and another piece of his mod heritage drops into place. There’s a scene that has him discussing selling the scooter to Gary (a cameo by Mani of The Stone Roses). Gary decides he’ll take the scooter — but needs to get rid of this, lose that, change the other.

It’s while all this is happening that John decides on what he needs to do…ride the scooter down to the spiritual home of the mods — Brighton — and spread his ashes on the beach. Now that’s a trip of about two hundred and fifty miles, or how far the typical American drives to buy a pizza, but that’s about two-thirds of the length of England — so adventures, obviously, are bound to occur!

There’s Such A Wealth Of Great Music, Clothes, Or Whatever

There were comparisons that sprang to my mind between The Pebble And The Boy and The Last Bus. Both are quintessentially British films, both feature a road trip, both feature a lost character finding his way, both feature the essential kindness of strangers, and both feature a plan to take someone’s ashes to their final resting place.

While the stories may be simple — the main character needs to take the MacGuffin from point A to point B, meeting people and having adventures along the way — the fact remains that, handled properly, this is enough to give an hour and a half of entertainment.  Both films managed that though differently. The Last Bus is all about the journey, whereas The Pebble And The Boy is mainly about events at the destination.

Chris Green’s writing and direction is adequate, but I do wish he’d taken advice on his female characters.

The Pebble And The Boy is carried by Patrick McNamee and Sacha Parkinson (as Nicki) who he befriends on the trip. Both are excellent; McNamee is convincingly lost, bewildered, and distraught, while Parkinson is feisty, funny, and a fizzing tower of strength; those characteristics though are a wee bit formulaic.

Throw in a whole slew of cameos, including one by Patsy Kensit who is as gorgeous now as she was back in Lethal Weapon 2, and you end up with a string of characters all contributing bits but not really saying much.

This includes Brighton itself. The impression you get is that everyone in Brighton wears a parka and rides a Lambretta. I’ve asked friends with Brighton connections and, apart from the annual mod weekender held in the summer or themed club nights, it isn’t noticeably mod-ish; thanks Keri and Mark!

And This Is My World Today

Then again, the opening was allegedly set in Manchester, but it was obviously one of the leafier suburbs which I never saw, despite living and working in the Greater Manchester area for forty years. So we are looking at Manchester and Brighton through a Love Actually/Amelie lens?

Any other complaints? I suppose that were I forced to find another nit to pick it’d have to be the soundtrack. There’s nothing wrong with it at all. The opening titles are made up of 8mm footage of teens mucking about while My World by Secret Affair plays. The soundtrack is made up of what music the mod scene developed into: The Style Council, Paul Weller, The Jam, etc. A live concert by Paul Weller is a plot point almost from the beginning.

All good music; just not enough of it!

chevron_left Is there anything extra during the end credits of Antlers?
Movie Review – The French Dispatch chevron_right