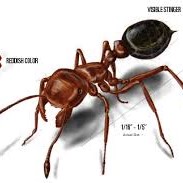 Assuming the MCU is in our universe, every ant we see in the film Ant Man is female. All worker ants are sterile female clones. Male ants are called drones, and are only used for breeding, then discarded. Queens stay in the nest. This is how ant society works, and if you study ants at all, it works well for them — it’s geeky fun science stuff. But to mention this kind of insect reality in the Ant Man movie would be a little uncomfortable.

[pullquote]Scott Lang (Paul Rudd, in a charming role as the Ant Man) names his ant sidekick Antony, a male name.[/pullquote] Not that this matters at all to the insect in question, or to the movie even. But I think it’s still interesting to consider in these films that all the ants are female.

Wasp society is similar — if you’ve ever been stung, it’s by a female. The stinger and the ovipositor (egg layer organ) are the same thing. So putting Hope and Janet in Wasp suits seems more satisfying.


Yellow Jackets, which are a hornet, are also a type of wasp. Again, the ones you see are female. [pullquote position=”right”]So the bad guy is wearing a female suit as well. That character seems like he wouldn’t be up to wearing “insect drag” — but none of this matters to the film or to us as viewers.[/pullquote]

Again, I am not trying to say there are gender or sexism issues here — the real reason Hank would not put Hope in the Ant Man suit was from fear of losing her, like he lost Janet. It wasn’t a case of sexism. (Seemingly he had no problem with his wife in a Wasp suit and they worked together developing the entire project. )

I used to study social insect behavior in Tucson, AZ. For what it’s worth, I’m just adding some neutral perspective. I prefer stories to use actual science and it impresses me when they do. The Bullet Ants, Crazy Ants (controlling electricity?), etc, is made up nonsense. But if they stick to the rules they themselves establish, I’ll be content.

After all, as far as we know there is no Vibranium in the world. No Wakana, which uses the Vibranium tech to incredible heights. But so far, they are consistent in how said tech is presented, and yay to that.🙂