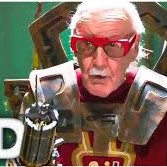 We all know about Stan Lee. He’s one of the big name co-creators of Marvel Comics, is a co-producer and co-writer for the movies,  and seems to be a little bit nuts. He’s been inducted into the Sci-Fi & Fantasy Hall of Fame.  He’s also, in one way or another, in every Marvel Cinematic Universe movie since Iron Man 1 introduced the modern superhero film. For a man who’s 95 years old, we’ve kind of got a wee crush on him and his wacky humor.

Just for fun, here’s the entire complication of Lee MCU cameos, from 1989-2018, plus a special appearance in the fabulous music video Guardians Inferno. [pullquote]You’ll have to sit back and enjoy all this as a sort of mini-movie, since it takes a half hour to view it all.[/pullquote] We’re not including his X-Men Marvel cameos here, or from any prior Marvel franchise (those other Spidermen, or the Fantastic Fours), or even the ones in Deadpool, since this article is long enough. We’ll pull those together for another time.

What’s cool about this Stan Lee mini-movie is that Marvel has confirmed Lee has an actual character within the MCU — as a Watcher Informant.


But, one of these is reportedly Lee’s absolutely favorite MCU cameo. Can you guess which one, before it comes up?

2015 – Avengers 2: Age of Ultron (THIS is Stan Lee’s favorite MCU cameo. The reason? It’s a subtle two scene event, where he asks Thor for a drink, who responds by saying it will kill him…and then is later seen being carried out. Blink and you’ll miss it.)

2017 – Taking place between GotG2 and Avenger’s Infinity War, this video is just plain fun, giving Lee his full celebrity due (not a canon part of the MCU).

2018 – Ant Man and the Wasp  — JUST IN!….UPDATE, next day: this is no longer available…blame Disney, who went in and blocked it. Poopers.

Allrighty. Here’s another version. Let’s see how long this one lasts. The scene is short and cute.

Updated again: Really, Disney? You know we’re just going to keep posting these, so peace out! Here we go again:

More will be added as the saga continues and the clips become available. Sources say Lee hates to fly, and it’s getting harder for him to do these appearances, so he shoots a bunch of them back to back now. I hope he sticks around long enough to see the saga through. (Although at this point at the box office, it may never end. Everyone reading this could die before it’s done.)

Which is your favorite Stan Lee cameo? Comment below!

Movie Review – Guardians of the Galaxy

Deadpool is (sort of) a Cross-over Character Between Marvel Franchises