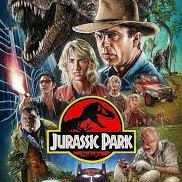 YouTube has some ongoing series related to movies that are so clever and fun, like the Honest Trailers, or How It Should Have Ended. Here we have the Everything Wrong With shorts (each about 15 minutes). [pullquote]These are funny and insightful, and if some of the nits they pick are petty[/pullquote], even they admit some movies just don’t have much that went wrong. Like in the original Jurassic Park film — a classic that still holds up after all this time. (In our RunPee Rewatch, we gave it a rare A+).

In one place now, enjoy the whole Jurassic oeuvre and have a good-hearted laugh at What Went Wrong.

See, here, the first JP “Everything Wrong With” is only 3 minutes long (contrast with the 15 minutes for JP III). Not even these guys could pick a lot of fights with this truly good film:


With Jeff Goldblum headlining the show for The Lost World, the movie should have been a lot funnier. But it’s still the 2nd  best Jurassic film, and the plot mostly hold it together with a coherent story, super gymnastic dino fighting powers aside:

In this third movie, JP III, everything went wrong, and it killed off the series for about 15 years:

Jurassic World reinvigorated the franchise by going back to basics and hiring Chris Pratt, who brings a vitality and casual humor to everything he does:

For comparison, there’s also a Everything Great in Jurassic World.

Since the Everything Wrong guys haven’t released their video for Jurassic World: Fallen Kingdom yet, this will do for now:

(SPOILERS FROM HERE ON IF YOU HAVEN’T SEEN FALLEN KINGDOM)

And for a bonus video, can you name every dinosaur that escaped in the end of Fallen Kingdom?

I nabbed them all. (But then, my nickname could have been DinoGeekGirl.) Which dinosaurs did you recognize?