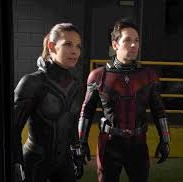 People are wondering why the big beautiful Avengers 3 – Infinity War is being followed so closely in the Marvel Cinematic Universe by, of all heroes, the Ant Man. With Ant-Man and the Wasp smashing across theaters July 6, we’ve barely had a moment to absorb the calamitous events of the Infinity War. Where, as you might have heard, a LOT OF STUFF happens. (If you haven’t seen it yet, GO NOW.)

Ant Man and the Wasp, strangely, will be the 20th film in the MCU. If you’ve been up to date with the Avengers, you might be curious why one of the lower ranking MCU heroes — who’s been on hiatus since Captain America 3: Civil War (on ‘house arrest,’ just like Hawkeye) — is the next star in this ten-year-old lineup of films. Why him? Why now?

[pullquote]Most people across the internet guessed that Ant Man and the Wasp was intended as a palette cleanser, serving up a comic, lighter fare to audiences — just like the original Ant Man in 2015 did for the heavier Avengers 2: Age of Ultron. But there may be more going on this time than previously assumed.[/pullquote]
-----Content continues below------

Spoilers for Avengers Infinity War to follow. Plus idle speculation about Ant Man and the Wasp.

It seems like we NEED an Ant Man story right now. Remember the Pym Particle, and Hank Pym, and the Quantum Realm (QR for short)? The QR wasn’t a huge part of Ant Man in 2015, but we do know Hank’s wife is stuck there, and that Scott Lang somehow escaped it. He should have been trapped, “forever shrinking.” There’s a lot we don’t know about such a vast, and yet tiny, playground. Fans have assumed Scott and now Hope (as the Wasp) will be going back and getting Hank’s lost wife in their next outing.  Sounds good, right?

[pullquote position=”right”]But what if the QR provides a way to undo Thanos’s big universe killing snap, somehow?[/pullquote] Who else might know a few things about the QR?

Possibly Dr. Strange, who’s seen and done many “strange” things, especially in his own movie. He has a connection to space and time that goes beyond the Time Stone. And while he’s dust now, he did look into over 14 million timelines to see the ONE that works out for the good guys. Maybe he saw that Ant Man and the Wasp have something to do with this, on a sub-particle level.

Okay, who else might come into play? There’s the 21st movie in the MCU queue: Captain Marvel. At the very bitter end of the Infinity War, Nick Fury seemingly sends a page back in time to Ms. Marvel. What are her powers? Without using the comic books for reference, we have to assume there’s something Fury thought she could do to save the universe…and maybe bring back those who turned to ash. [pullquote]It’s possible the Quantum Realm, outside normal space and time, has to do with this. In which case, bringing the Ant Man back now makes sense. Maybe there’s more than just a need for lighthearted comedy on the larger MCU plate.[/pullquote]

Movie Web has this to say about our conjecture: “At this point in time, it seems that the exploration of the Quantum Realm in Ant-Man 2 will play a large part in Avengers 4, leading to a journey through time and space to reverse the snap of Thanos. Time travel was the guess from most fans of the MCU, but it seems that some interdimensional travel will be closer to what actually happens in the final movie of phase 3. The real question will be how they implement the Quantum Realm in Avengers 4 and who is able to come back.”

In this piece on Movie Web, they explore this idea more, focusing on Captain Marvel taking her own trip to the QR, and tying directly into Ant-Man’s oeuvre.

Inverse.com takes everything a huge step further, implying that Ant Man might not be a second string hero at all, but could potentially be the most powerful superhero. (I’d like to add that this doesn’t refer actually to Scott Lang, but potentially anyone using the suit to enter the QR.)

Here’s what Dr. Spiros Michalakis, quantum physicist, wrote in 2015: “[I]f someone could go to a place where the laws of physics as we know them were not yet formed, at a place where the arrow of time was broken and the fabric of space was not yet woven, the powers of such a master of the quantum realm would only be constrained by their ability to come back to the same (or similar) reality from which they departed. All the superheroes of Marvel and DC Comics combined would stand no chance against Ant-Man with a malfunctioning regulator.”

What this means: The Ant Man 2 movie might not be as fluffy as it appears. The trailers look fun and silly, the posters seem light enough, and the first movie had admittedly smallish stakes. Plus, it was almost entirely comedic. But right now, things in the MCU are dire. Ant Man and the Wasp might be a sneakily serious story, and of greater import than anyone previously suspected.

We’ll find out next week.