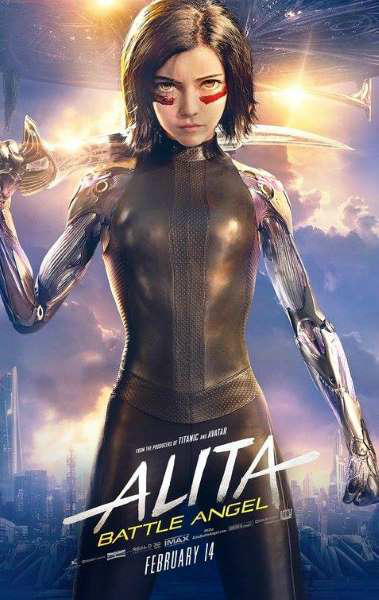 Alita: Battle Angel is a sort of YA version of Ghost in the Shell, and I’m not exactly thrilled to see the same thing re-done in so short a period of time. At least this one was more enjoyable, with better humor, more likable characters, and a universe that might be more interesting to explore if a sequel happens. And let it be clear: a sequel isn’t just hinted at in Alita. A sequel is guaranteed, if the movie’s ending is to be understood. It’s a cliffhanger, ya’ll. You should know this going in.

What’s good? [pullquote]The animation is seamless, and the battling Alita herself looks great, giant eyes and all. The Uncanny Valley is not even an issue here: “cute” bypasses the Valley entirely.[/pullquote] And cute Alita is. So is her boyfriend. And her ‘dad.’ It’s not a depressing film, unlike Ghost in the Shell, so it’s got that going for it.


I’m not even sure what else to say about this film because I wasn’t as impressed as I wanted to be. I saw a special early showing that was entirely sold out (my seat was in the literal front row, lending the 3D glasses a terrible viewpoint).

Clearly, the anime excitement and interest was there for this series, even if the presentation wasn’t as freshly new as I’d hoped. Also, while Rosa Salazar is adorable as Alita, she’s no Scarlett Johansson.

What is it about waifish cyborg girls and a future of augmented human bodies? Are we just our brains?[pullquote position=”right”] Can a brain-in-a-jar still be human? These are questions our progeny will have to address, and it comes up fruitfully here.[/pullquote]

I’m giving Alita a good B grade — it’s worth seeing on the big screen, and there’s potential for a decent franchise here. I smiled and laughed, and wanted to know more about the air city above the space elevator.[pullquote] Is the Earth used up? Is humanity lost and debased? And, ultimately, can a few good people influence the course of the future?[/pullquote] According to Margaret Mead, that’s all that ever can. Alita: Battle Angel seems to think we can too.

About The Peetimes: Here are 3 Peetimes of 3 minutes, nicely spaced apart. The 2nd and 3rd Peetimes are better. There’s a lot of action in Alita, so you’ll want to pick a Peetime to not miss the better scenes.

There are no extra scenes during, or after, the end credits of Alita: Battle Angel. (What we mean by Anything Extra.)

Rated (PG-13) for sequences of sci-fi violence and action, and for some language
Genres: Action, Romance, Sci-Fi

Movie Review – Ghost in the Shell

What is Animated versus Live Action in Alita – Battle Angel