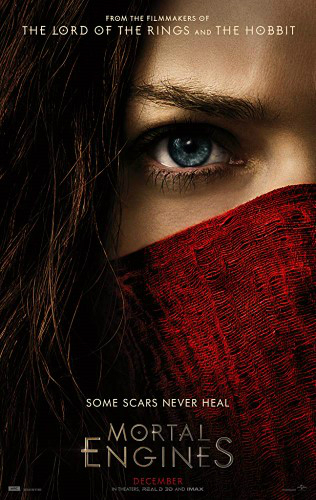 I’m still digesting this pretty darn awesome movie. I’ll just say I’ve never seen a better Steampunk film (not that there’s a lot out there…). This has interesting characters, amazing world-building, and spectacular set-pieces. It’s a brilliant effort by the producers of The Lord of The Rings. I’m a happy girl tonight. Loved it.

….Don’t read any further if you don’t want spoilers…..


More goodness: the bad guy was played by Hugo Weaving, who’s shaping up to fill the hole left by the demise of Alan Rickman. He was just lovely in the part, even if his character’s motivations seemed forced. I’m going to blame the writing on that one.

Weaving did a great job with what he had. Most movies have “villain problems” — it’s hard to make a baddie we can relate to, or at least understand. The character of Thaddeus Valentine should have been more layered. He has an adult child with him, who presumably might have noticed once or twice if her father was evil. I get that London needed more fuel to survive, but I’m not sure using the particular weapon he did would net London any resources: it’s too destructive. By the end he became a generic cackling guy with a world-killing weapon. It’s absolutely a fine film, but this issue keeps it from getting an A+.

I felt like the narrative could have used some more backstory about why the cities and towns had to be mobile (something more than the cool factor). And there was a missed opportunity by never using the zeppelin a character sees and looks at thoughtfully. I kind of feel that maybe a later scene with it was cut from the film — or why bother showing it tethered nearby?

I did like the creative designs used on the different airships, and how they recalled a feeling of sailing on the ocean more than flying in a plane. The various captains even had a piratey flair.

This future world was splendidly envisioned, which is to be expected from WETA Workshop, who, along with producers Peter Jackson, Fran Walsh, and Philippa Boyens,  created The Lord of the Rings and the Hobbit. And of course we know Weaving as Elrond of Rivendell. I’m guessing a lot of crew members were also ported over from that universe to work on Mortal Engines. It really is a visual achievement.

As far as the plot goes, I kept thinking I was missing big pieces of the story, things that might be better explained in a novel. So I had to go check..and guess what? Mortal Engines is indeed a book. In fact, there are four of them.

Personally, I’m all in for a sequel set. I was engaged by this new Steampunk world and seriously wanted a lot more exposition than we got.

(Here’s a example: what in Thor’s name was Shrike? Some kind of cyborg? The memories of a person transplanted into a robot? Was he a technological version of a zombie? Why was he making dolls, why did he take in a little girl; why did he need Hester to become like him? What was the story with his elaborate prison cell? He was an intriguing element in the story, but his arc seemed undercooked.)

I feel like I could fill in some of this backstory on my own, but I’ll probably just read the book. And I’m sure I’ll see this film again when it’s available for streaming.

I’ll leave you with this quote from William Shakespeare‘s Othello, explaining the film’s title: “Othello: And O you mortal engines whose rude throats/Th’immortal Jove’s dread clamors counterfeit…” Mortal Engines refers to the concept that a society based on Municipal Darwinism is not sustainable, and that the cities’ engines are indeed mortal.

About The Peetimes: A lot happens in this movie, and it’s quite economical in pacing throughout. I’d recommend the 1st Peetime if you can manage it. The 2nd Peetime has an interesting set-piece, but it’s not relevant to the plot. The last Peetime contains action, but in a movie as full of action as this, you’ll be fine if you stick to the 3 minutes I gave you.

There are no extra scenes during, or after, the end credits of Mortal Engines. (What we mean by Anything Extra.)