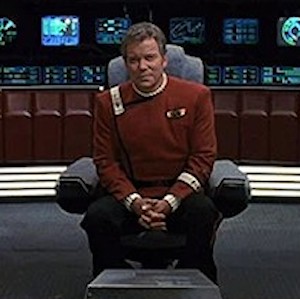 Looking over the entire Star Trek movie franchise, there are good ones, great ones, and outright poor ones. Star Trek 6: The Undiscovered Country is one of the good ones, and just misses being great. I’d say it falls lower than Wrath of Khan, The Voyage Home, and First Contact, but feels on a part with The Search for Spock.

What is Trek 6: The Undiscovered Country about?

Mostly Klingons. But, it’s one of the more historical world-building efforts from the feature film lineup. Like First Contact — documenting humanity’s first warp-capable ship, test flight, and subsequent long-awaited first meeting with an alien race — The Undiscovered Country centers squarely on the slog towards peace with the Klingon Empire.


These events square well with what we know in Star Trek: The Next Generation’s history, leading to the Khitomer Accords. If you know Trek like the back of your tricorder, you won’t find fault with Trek 6, but it’s also accessible for Muggles. 😉

Peace between the Klingons and the Federation is not an easy road. Star Trek 5: The Final Frontier touched on these notions and laid the groundwork for The Undiscovered Country, which is one of the few good things most can agree upon in that benighted film.

In 6, the peace-waging efforts are further underway, with David Warner — Chancellor Gorkon — giving us one of the best Klingons filmed. I loved Gorkon’s innate nobility and goodness. Warner was like a visionary Klingon version of Gandalf: Gorkon was the kind of Klingon Worf would have been honored to follow.

Warner was the same actor who played the quietly menacing Cardassian Gul Macet in the two-parter where Captain Picard gets tortured: “Chain of Command, Part Two….” If you’re a fan, you know the one. (Warner was also in The Final Frontier, but he had so little to work with that he may as well not been there at all.)

The late Christopher Plummer plays a notable Klingon too, in a villain role that’s not close to Ricardo Montalban’s Khan, but stands out as more than serviceable. It’s hard to get a good baddie right. Even the Marvel Cinematic Universe has their share of boring big bads, so I’ll cut Plummer a lot of slack. If General Chang comes across as over the top, I’m going to blame that on the directing.

Plummer certainly went all in. His unhinged chair swirling while shouting CRY HAVOK! AND LET SLIP THE DOGS OF WAR is one of Trek’s most memorable moments.

As for the crew of the Enterprise, everyone had something to do, which is appreciated. Dr. McCoy had more screen time than we’ve seen since the TV series. Sulu gets his own ship. Scotty doesn’t knock himself out on a bulkhead, nor does Uhura do a naked fan dance. Kirk gets one last girl. (McCoy: “What IS it with you?”) And with Spock, we see the seeds that he’ll sow later to try and broker peace with the Romulans (TNG’s: “Unification, Parts One and Two.”)

We also get Worf playing his own ancestor, which I can’t find fault with. General Worf is no Lieutenant Worf, but you can see bits in Michael Dorn’s work to hint at his own future grandson. Also, again: Khitomer!

As far as the Vulcan Valeris, I’m not sure what to think. I like Kim Cattrall’s smug take on it, but I would have been more excited if they had stuck with Saavik in the role, as originally intended. (It’s not like the role hadn’t been recast before. Cattrall could have been Saavik, and we would have gone with it, instead of wondering where this previously major character got off to.)

That said, when Spock smacks the phase pistol out of Valeris’s hands, I think that is as angry as we have EVER seen Spock.  This is a huge betrayal for him: he had personally mentored and groomed the young Vulcan as his successor. Leonard Nimoy manages Spock’s intense fury with aplomb, without ever breaking character. He’s used to honorable people in the Federation. You do not want to disappoint Spock.

The Valeris character ultimately works, because we expect Vulcans to be noble, and because it really all makes sense if you think about where her form of logic goes. (You can basically logic anything.)

The forced mind meld with Spock is deeply uncomfortable, but if you watch the cast in the background, you see this violation is intended to be difficult. It’s a terrible experience for both Vulcans. Mind rape is a big deal in the Trek oeuvre. If Spock forced such an intimate experience, you’re not intended to cheer.

There are two episodes in the larger franchise that maybe as well be part of The Undiscovered Country. In the prequel series Star Trek: Enterprise, we get an entire episode (“Judgment”) echoing the Klingon show trial — hooded judge, sparking gavel, beleaguered defense lawyer, chanting chamber nuts, everything. There’s even a scene on the frigid prison planet of Rura Penthe. It’s one of Enterprises‘ best episodes, none the worse for paying such detailed homage to the source material.

Star Trek: Voyager got in on the action too. Their  30th Trek anniversary episode “Flashback” was a tale of two stories, one of which was awesome, and one was dull. The epic parts take place on Sulu’s Starship Excelsior and fills in some missing pieces within The Undiscovered Country. It also features Grace Lee Whitney’s Yeoman Rand — now Commander Rand — and a few other characters we’ve seen before.

If you’re a big Trek fan and doing a feature film rewatch, it’s worth tracking down “Judgment” and “Flashback” as bookends to The Undiscovered Country. Why not? It makes the universe richer.

There’s also this extra bit I found on YouTube. Take the two minutes to see a new discussion between Chancellor Gorkon and General Chang. They packed a lot of Klingon peace/war backstory into this little scene.

One last thought. The next movie, Generations, does feature several original cast members. However, it really feels more like a Next Gen film, with mainly Kirk on hand to lob the torch to Picard. I’d consider The Undiscovered Country the final film in the TOS lineup, the swan song for the crew that started it all in 1969.

If you stick around as the credits start, you’ll see the autographs of the cast as they sign off. This was a fitting final film for them, treating the crew with the dignity they so richly earned. It’s worth taking a misty-eyed moment to wave goodbye to these iconic and beloved characters.

About The Peetimes: Both Peetimes are good, but the 2nd is a bit better since the scene has absolutely nothing to do with the plot. 🙂

There are extra scenes during, or after, the end credits of Star Trek VI: The Undiscovered Country. (What we mean by Anything Extra.)

Alrighty, some more extra scenes with General Chang. It’s amazing what you can find tucked away on YouTube. RIP, Christopher Plummer!