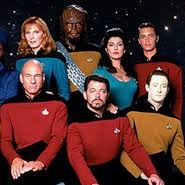 Sir Patrick Stewart, in an emotional surprise speech this month at the  2018 Las Vegas Star Trek Convention, announced that Jean-Luc Picard is back. CBS, on their All-Access subscription streaming channel, will be gifting us a new Star Trek show centered around the beloved Picard character. It’s set to premier in the fall of 2019, to appear roughly 20 years after the end of Star Trek IV: Nemesis.

Some actors from previous Trek incarnations are still quite active and energetic about their characters and involvement in Star Trek as a whole, on many forms of media. When we look into the future of the 24th century, I’m positive there will be more than one familiar face as either cameos, regular guest appearances, or even as full-fledged cast members. In fact, CBS will probably have to beat these actors off with Klingon Pain Sticks. There are a lot of characters to choose from who could conceivably be still alive and around.

I’ve got my theories on who we’ll see again. I’m basing this list of who’s been continually active in this (or any closely-related) franchise.To the list!

Characters from Star Trek that will probably appear in the as yet unnamed Jean-Luc Picard series:

Less Likely:  Characters from The Original Series and Enterprise

Could anyone from The Original Series pop in? The problem here is that 1. said characters would have to be alive and long-lived, and 2. their actors would need to still be alive and in good health.

This counts just about everyone out, in one form or another, unless we use flashblacks, time-travel, or other well-worn sci-fi tropes. Sulu is a possibility if we go with one of those (George Takei had a well-received flashback episode on Voyager — named, appropriately, Flashback — and is a very active on the internet celebrity). There is also Chekov (although Walter Koenig has been conspicuous in his acting absence).  William Shatner’s Kirk is long dead, though the actor remains hale and is still acting, so….maybe? Note: I’m going to use the Prime Timeline-verse here. That would  muddy up the spaceways too much.

It’s even less likely we’ll have anyone from Enterprise on the new show, since their timeline is set even earlier than TOS. However, as these actors would be younger than anyone from TOS, TNG, DS9, or VOY, a flashback/time travel appearance could surprise us. One problem is that Enterprise is the least-loved, least watched show of all the old Treks, and producers probably want to sweep the memory of this one under the carpet.

What about Star Trek: Discovery?

This brings us to the much-derided Star Trek: Discovery. Even a die hard Trek fan like me won’t watch this show. I caught the free first episode on television, and HATED it. Nothing I heard since seems good: it’s still dark, it’s still weird, and it doesn’t feel anything like the Star Trek we know. But since it’s going to be playing concurrently with Picard’s show, CBS showrunners will probably create a cross-over anyway.