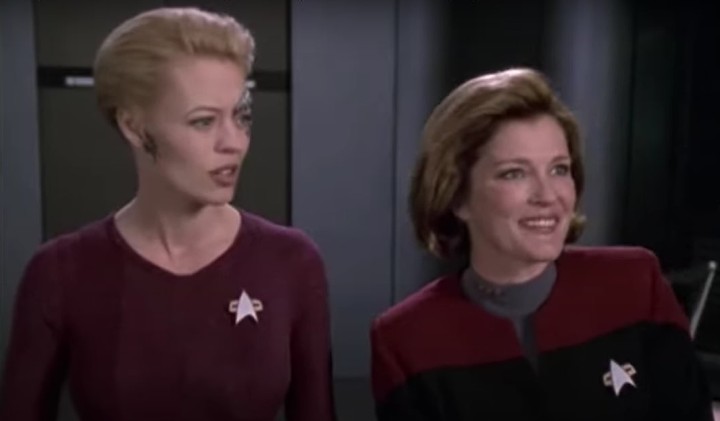 I wrote an article on how the Star Wars films stood up to the Bechdel Test, which is a simple measurement to determine whether any named female characters have a conversation about something other than men. This is not a stance for feminist debate so much as an observation. For what it’s worth, lets dive into how the classic Star Trek movies stack up, Bechdel-wise.

For some of these movies it’s been a while for me, and for some others I didn’t pay attention to the Bechdel aspect. So if I missed a moment, please let me know in the comments and I’ll fix this post. I’d love to add a movie to the plus column, since it’s looking like no for no in ten movies.

The Classic Star Trek Feature Films and the Bechdel Test

Star Trek: The Motion Picture — I really need to rewatch this one, since it’s been decades since a rewatch. But I don’t think this is a go. The two named women I recall — Uhura and Ilia — don’t talk to each other. NOTE: Upon a recent rewatch, I saw this held true. Also, poor Ilia was basically a sex symbol. It would have been fascinating to see a male Deltan and his effect on the crew. (Something The Orville managed with Rob Lowe!)


The Wrath of Khan — No. Saavik and Uhura don’t interact.

The Search for Spock — No. Same as above, even with the “new” Saavik, whose only role was to help poor Spock with Pon Farr.

The Voyage Home — This was a possible candidate, with cetacean scientist Jillian so prominently featured. But no. She only interacts with Kirk and Spock. Amanda (Spock’s mom) only interacts with Spock. Saavik briefly talks to Kirk. She also stands beside Amanda as the boys fly off from Vulcan on the Bounty. The scuttlebutt is Saavik is pregnant with Spock’s child, but this is never referenced again. Uhura is once again just there for a few lines (with Chekov in San Francisco), or does her communications thing on the bridge with the whale song. Good for her! But how about communicating with the new cetacean expert?

The Final Frontier — No.

The Undiscovered Country — Nope. There’s a powerful female Klingon, but still, sadly, this is a no. I just rewatched Undiscovered Country last night and am totally bummed that none of the five named women — Commander Uhura, Klingon Chancellor Azet’bur, Commander Rand, shapeshifter Martia, and even leading lady Valeris (an early Kim Cattral) —  had any scenes together. With all those women so prominent in the film, it’s a pity they still felt like tokens. Why were all those background Klingons and Federal Admirals men? We’ve seen Klingon warriors who were female before. YAY for so many important female bridge characters. Boo for not taking this far enough.

The Next Generation Star Trek Films and the Bechdel Test

Generations — This is basically the Kirk & Picard Show. Nope.

First Contact — This would have been a good entry if Lily talked at all to Troi or Crusher about the mission. Or if Troi and Crusher talked to each other at all. Or even if the EMH in sickbay was female when Crusher brusquely told him what to do. (It was nice to see Voyager’s Doctor, though — Hi Doc!)

Insurrection — Why are these Next Generation movies mostly about Picard and Data, instead of featuring the ensemble? Surprisingly, this sole movie does have Troi speaking to Crusher, but it’s one line: literally about their boobs. Was this necessary? Should it even count?

Nemesis — Every female is now completely sidelined in this strange final movie of the Prime timeline.

I’m not going to mention the JJ Abrams Treks, since this post is already long enough. But I don’t think the new, more involved Uhura interacts with any of the female guest stars, or they with each other. (Well, one brief scene in 2009 might count.)

In the late 60s, having a female as a ranking bridge officer was a big deal. Notice also Nurse Chapel: in the original Star Trek pilot, the same actress played the first officer. That’s next in line to the Captain. We take such things for granted now.

So, clearly both these franchises have a ways to go, although perhaps Star Wars might be, interestingly, closer to an accurate depiction of women interacting among “strange new worlds, new life, and new civilizations.”

I’ll be doing a full Trek Movie rewatch this year, so I’ll update this post as needed. Let me know in the comments what I missed.