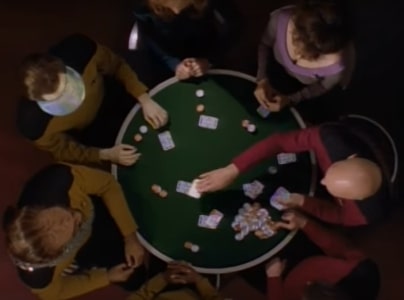 I always wondered at the Bridge Crew of The Next Generation of the Enterprise blithely playing poker together. Even while Data says in Cause and Effect, “The cards are sufficiently randomized” (and actually, they aren’t in this case), that doesn’t mean a thing to the senior staff of the NCC-1701-D. Half of them are superheroes, ya’ll!

How is this fair to play?

I suppose being a young person at the time TNG aired made me less discerning, but I see now that fully half these poker-playing-champs have super powers, making going against them entirely unfair. Why did Riker (and Crusher, at least once?) keep raking it in? Unless everyone else uses severely handicapped rules…


Here’s who’s playing Poker in Star Trek TNG, and who should be winning:

And then the rest…

5. Will Riker.  The man knows more about poker than anyone except Data (Will’s been playing since his first Potemkin posting to ingratiate himself with senior staff…and Troi says to not hold the same thing against junior staff in The Lower Decks). Riker’s got a stiff poker face. And he’s good at reading people, or he’d never be the fine first officer Jean-Luc tells everyone Will is. So he uses force of personality alone to win. People just fold around him because they know Riker will blow over their hands whether he’s got the cards for it or not. Also, he admitted in All Good Things that he cheats. 😉

6. Beverley Crusher. She should never win, unless by mere chance. I only buy her win in Cause and Effect because (as a Time Lord’s mom is my guess) she can sense the deja-vu in looping timelines better than anyone else. She also has an excellent grasp of the Scientific Method, which could be helpful if the superheroes are distracted.

7. Worf. Poor Worf. He’s not super smart or super anything useful in cards. Super strength avails the Klingon nothing here. All he brings to the table (ha!) is his serious intimidation factor. Also, as he says in Peak Performance, one of his main skills is “guile.” So I’m sure he can be sneaky, but after a few years of mutual play, he’s probably used his Poker tricks up by now. Worf doesn’t care, though. He’s probably like, “Sure, you win with these paper slips now, but let’s see you fight me in the holodeck, fool!”

8. and on… Others we’ve seen play from time to time: Dr. Kate Pulaski, Chief Miles O’Brien, Commander Shelby (in Best of Both Worlds), Ensign Wesley Crusher, and Bartender Ben (from Lower Decks). Has Lt. Barclay ever joined them? Whatever. Those are bit parts in a decades-ranging poker ensemble. Needless to say, these others have no superpowers. (Which for poor Miles is par for the course, considering his darts issues with superhuman Julian Bashir in Deep Space 9. That’s another story.) Also, let’s keep Wes out of this. He’s not a Traveler yet.

What’s unfortunate is none of these super powers are ever discussed in-universe, except in Peak Performance, where Riker is willing to lose against a Stratagema Master just for the experience of it. We have to hand-wave how to make this all fair. Maybe the Star Trek Picard show will tell us how these wildly unevenly skilled people managed to play one game fairly together for so long.

Still, Jean-Luc Picard ends The Next Generation with a big aww: “I should have done this a long time ago… [So], five card stud, nothing wild, and the sky’s the limit.”