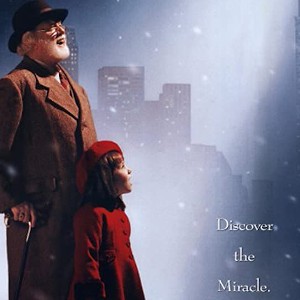 A good story bears repeating. At least that’s the impression you get if you look into your average film studio’s output. Who knows… maybe there’s a future article in that? Anyhow, as it’s rapidly approaching Christmas, I thought I’d take a look at one of my favourite Christmas stories — and two films — I’m thinking of Miracle On 34th Street.

As is probably well known, the story behind Miracle On 34th Street is of a genial old chap who happens across the start of a department store’s Christmas parade, and finds the man who is playing Father Christmas having a revitalising glug of something warming. He is outraged and kicks up enough of a fuss to get the drinker sacked, which leaves the parade without a main character. The organiser turns up and persuades the newcomer to stand in, and he eventually ends up working in the grotto.


The problems start when the stand in Santa starts claiming to be the real thing, which leads to people trying to get him committed. The friends that he’s made conveniently include a barrister, who goes on to contest the enforced committal. The crux of the case lies in the barrister having to prove in court that our hero is actually the real Santa Claus.

Six Of One And Half A Dozen Of The Other

The two films stick pretty closely to that story, but there are still some differences. I mean, Gus Van Sant made a virtual shot for shot remake of Psycho, but it was nowhere near as good as the original.

So how do our versions of Miracle On 34th Street measure up to each other?

The most obvious difference is that the original is in Black & White, while the remake is in Colour. Then the running time… in 1947 it was one hour and thirty six minutes, but the 1994 version is just six minutes under two hours. So, pretty colours and about twenty minutes more of something.

Is there anything else?

In short, yes. The original is a lighter, happier film, while the newer version has darker, more sinister undercurrents.

When the 1947’s Kris Kringle (Edmund Gwenn) upbraids the drunk on the float (Percy Helton), the drunk is very drunk, comically so, slurring, and about to pass out. The 1994 Kris (Richard Attenborough) just sees Tony Falacchi (Jack McGee) having a drink; he doesn’t act drunk at all. Tellingly, Jack McGee’s character gets a name and another couple of scenes — Percy Helton didn’t even make it to the credits!

As it’s a Christmas film involving Santa Claus, then there has to be a child involved somewhere.

In ’47 it was a young Natalie Wood playing Susan Walker, and for ’94 it’s Mara Wilson. In both cases she’s playing a young girl being brought up by single mum Doris (Maureen O’Hara), followed later by Dorey (Elizabeth Perkins). Obviously Doris had gone out of fashion by 1994 so we’ll make a name up. She’s being brought up in an atmosphere of truth; Santa, fairies, the Easter Bunny, etc. do not exist, which Mum’s love interest Fred Gailey (John Payne) in 1947, and Bryan Bedford (Dylan McDermott), finds hard to cope with in a child; Gailey seems to have acquired enough other connotations that it was deemed necessary to change it.

One “problem’ that was addressed in the remake was that of religion; if you don’t believe in stuff you can’t prove, then where does religion fit in? It’s not mentioned in the original and, I’ll be honest, it didn’t dawn on me until I watched the remake… and there was an awkward prayers before dinner scene.

There is the famous scene in the original when a woman brings a newly arrived Dutch orphan she is fostering. She explains she’s told the girl that Santa won’t be able to understand her but, lo and behold, this Santa is real and he starts chatting away in Dutch. Apparently the girl is speaking Dutch but with a heavy American accent… ah well. In the remake it’s a deaf girl that turns up, and he turns out to be fluent in sign language. Well, ASL at least, there’s no evidence he knows BSL…

It’s Not Just The Grinch Who’s A Bad Guy

Then there is the downfall of our hero. In 1947, Kris is arguing with the store’s medic Granville Sawyer (Porter Hall), who fancies himself as a psychiatrist.  This develops into an argument and Kris bops him on the head with a brolly. Sawyer pretends to be more seriously hurt than he is in order to get Kris fired and committed.

The 1994 version takes a different tack. Tony Falacchi, at the behest of a rival store, accosts Kris in the street and accuses him of having a “thing for the little ones,” at which point he gets bopped on the head by a walking stick. Falacchi goes down pretending to be unconscious, and a crowd, including a newspaper photographer and employees of the rival store, appear out of nowhere and Kris gets arrested. In both cases the nature of the assault is exaggerated, but the argument is that Kris is deluded and dangerous.

So both films go to court.  This puts the judge and the prosecution in an awkward position… they are having to rule on whether Father Christmas is real and whether it is our guy. Now obviously the good guys win; it’s Christmas after all! In the original, the case is proven by the US Post Office delivering all the mail they have cluttering up the sorting office to the courtroom, and a government agency can’t be wrong.

In the remake it’s down to a dollar bill which has “In God we trust”  printed on it. Again, the argument is that a government agency can’t be wrong, so if they are accepting the existence of one mythical creature, then we have to accept another — another example of them desperately trying to shoehorn a religious message into a film about the commercial essence of Christmas.

There are other differences too.

In 1947 the rival stores were Macy’s and Gimbel’s; both stores had a veto on the finished product, but both were happy with the finished result.

In 1994 Macy’s refused to allow the use of their name, and Gimbel’s had gone out of business. Cole’s and Shopper’s Express are the fictional rivals. The proof that Susan wants to prove Kris’ true identity is a house in an estate agent’s listing in the original, and a photo from a magazine later on. Also a father and baby brother gets thrown into the deal.

Another difference is timing. The original was released in May, and the fact it was a Christmas film was hidden; the remake was out and proud… out in November and proud to be a seasonal offering. Apparently on its original theatrical release, Twentieth Century Fox offered a full refund to any viewer who didn’t enjoy the 1994 version. Approximately 1,500 tickets were returned to the studio.

One nice thing: Alfred in the original is played by Alvin Greenman and he has a cameo in the remake as a doorman. A less nice thing is that Jane Leaves has a virtually non speaking role as a ‘heavy’ trying to bring Kris down. The only reason for this is that it was about the same time as she was appearing as Daphne in Frasier, and they were trying to cash in on her new found fame.

An even worse thing is an example of how attitudes have changed… in the last twenty five years!

In the remake Bryan Bailey proposes to Dorey Walker, and she politely refuses him. He gets annoyed and starts berating her and we’re obviously supposed to be on his side, but nowadays the more common reaction is to think “She owes you nothing, she can say no if she wants,” but I think strong women were still a bit of a novelty back then.

Anyway, I like both films but I prefer the original due to its lighter, more comedic touch.