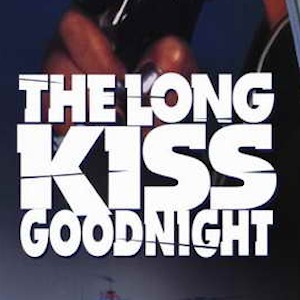 The Long Kiss Goodnight is a great film. It has action, thrills, humour, intrigue, suspense… everything! Geena Davis is gorgeous and believable as both the mumsy Samantha Caine and the deadly Charlie Baltimore. Confused? How about if I say that Sam Caine is an anagram of ‘amnesiac?

Samuel L Jackson is brilliant as Mitch Hennessey, the low rent private investigator that Sam hires to find her past. He is funny, sharp, and can knock out an action scene with the best of them.  In fact, on the Tonight Show with Jimmy Fallon on 14th January 2019, he listed Mitch as his favourite role.


The writing and direction are both excellent and have great pedigrees. It was written by Shane Black, who was responsible for all the Lethal Weapons, Iron Man III, and The Predator. The director was Renny Harlin from Finland, who proved his action chops with Cliffhanger, and Die Hard II. Throw in a strong supporting cast including Brian Cox, David Morse, and Patrick Malahide, and you can see that all the right ingredients are there.

For those who don’t know, The Long Kiss Goodnight is about CIA assassin Charlie Baltimore, who is injured and loses all memory of her past, and settles down as a mother, wife, and PTA member. Intrigued as to who she really is, she hires private investigators to look into her past, but as she runs out of money she ends up going further down market. When she’s scraped the bottom of the barrel so much she’s looking back up from underneath, she ends up hiring Mitch Hennessey.

It turns out that she starts popping up on the radar simply because she’s forgotten she’s supposed to be staying undercover. A bit on the local news brings forth a series of traumatic events and heeere’s Charlie!

From now on spoilers — or the avoidance thereof — prevent me from saying too much more, but it is a non-stop thrill ride. At the time The Long Kiss Goodnight was made, Renny Harlin and Geena Davis were married. They’d made this, along with Cutthroat Island, for two reasons: to boost Geena Davis’ career and to generate public interest in strong, female, action stars.

Previously, there had been Anne Parillaud in Nikita, but afterwards the list is much longer… Atomic Blonde, Salt, Red Sparrow, Anna, Mr & Mrs Smith, Hanna, to name but a few.

And Geena Davis is a strong action star — well, Charlie Baltimore is. She’s tough, ruthless, and resourceful, and Geena carries it off magnificently. Samuel L Jackson is funny… very funny. I really don’t know why he doesn’t do more comedy. However, I think the funniest lines come from Brian Cox; that’s the older Scottish actor, not the younger Lancastrian physics professor. He has little more than a cameo but nearly every line he says is very, very funny.

And, if I may digress a wee bit, Craig Bierko as the antagonist, Timothy, is everything a spy should be… suave, debonair, and handsome. So why did they think, even for a nanosecond, of casting him as the ultimate slob and space bum in the failed US remake of Red Dwarf? I know John Belushi was dead, but there must have been someone else!

Anyway, the only way you can get to see this is if you buy the DVD or Blu-Ray. In the UK, at least, it doesn’t show on iTunes, Netflix, or Prime Video.

If you like sharp, fast action thrillers with more than just a touch of humour and plenty of quotable one-liners, then give this a watch whenever you can.