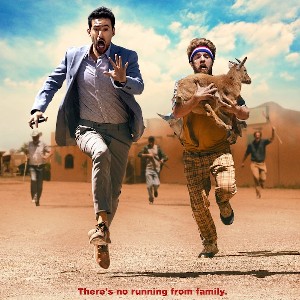 Half Brothers exceeded my expectations, especially since the trailers didn’t show you the depth of the movie. There was a lot more to it than a quirky comedy.

The dynamics of the brothers was my favorite part, but the story also caught my attention. It was a deep tug on your heart strings kind of movie. The directing and acting both were so well done that you super cared about them and wanted them to find what they were seeking.


I took my seven year old granddaughter to see it (luckily she is a very fast reader) and she loved it too. There is a very large portion of the movie that is subtitled, so reading is required. She actually cried twice during the movie, and laughed out loud even more. When I asked her what her favorite part was she said, “The goat. He was awesome.” She’s not wrong. The goat was indeed awesome.

This is definitely a dramedy of epic proportions. It has some serious current issues that our country is facing. It brings attention to so many problems that we are not dealing with but need to deal with, in a compassionate way. It opened my eyes to things I hadn’t though of or experienced before.

I don’t think you’ll be disappointed with Half Brothers. So if you’re willing to face the outside world, check this movie out.

About The Peetimes: Heads up — if you don’t speak Spanish, you’ll have a lot of reading to do. A large portion of the movie is subtitled. I specifically found Peetimes that were only in English, as to not lose something in translation.

There are no extra scenes during, or after, the end credits of Half Brothers. (What we mean by Anything Extra.)

chevron_left Miracle On 34th Street – 1947 vs 1994
Is there anything extra during the end credits of Half Brothers? chevron_right