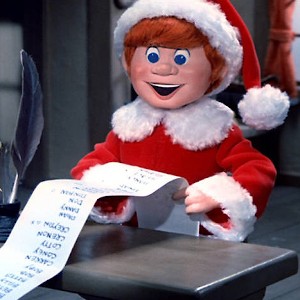 Old Christmas TV specials can be downright bizarre. I grew up watching the animated cartoons like  Frosty the Snowman and The Grinch, and eagerly lapped up the clay stop-motions like Rudolph the Red-nosed Reindeer, and The Year Without a Santa Claus. Joyous holiday fun, right?

Yes. And no. They’re enjoyable shorts, but as an adult I’m noticing really strange beats, weirdo songs, and odd, almost off-putting characters. Some of these things resonate through the years: we’ve learned to use the term Reindeer Games to signify human pack behavior that’s intended to be more clique-ish than inclusive. And among those experiencing “outsider status” alienation, the concept of The Island of Misfit Toys really hits home.

Here are some of the best wacked-out characters and songs from decades ago that we still love, probably because of their strangeness.

Remember the Heat Miser? There’s also a Snow Miser, but nobody remembers him. The Snow guy seems too nice, but the “Heat Blister” is the king of strange. If you’ve ever seen this, the lyrics come flooding back. (He’s too much…da da da duh…)

I can’t go any further without mentioning the beloved song, You’re a Mean One, Mr. Grinch. What great about this song is there are so many additional lyrics as the song reprises over the course of 26 minutes of cartoon runtime. It’s really creative and each set gets wilder and weirder. I love this. Between The Grinch and the Heat Miser, it’s like grumpy geek nirvana.

This is the cutest one in the holiday lineup, with a whole lot of adorableness and a great message about tolerance, compassion for others who don’t fit the societal role, and the kind of understanding that leads (if we’re really lucky) to friendship. Everyone in this special is damaged goods in some way, even Santa himself, who has to stuff himself unhealthily to fit the “image” of a fat old man. But the real strangeness award has to go to the Abominable Snowman, who’s only cranky because his teeth hurt. Enter the elf who wants to be a — gasp! —  dentist. It all comes around, and Rudolph’s deformity saves Christmas. I hope the other reindeer invite him to play their games and he tells them off. Although, I guess, that’s defeating the spirit of the message.

The Island of Misfit Toys also qualifies as weird. There’s a birdfish, a crying dolly, a Charlie in the Box, a train with square wheels…all toys probably made by elves on crack. The toys believe no child would ever want them. In reality — our reality — there are kids who’d love them instead of getting the boring same-old toys: these are unique. And remember, even in this day there are children who’s families can’t afford any gifts. They would CHERISH these toys.

Those who are different don’t have to be outcasts, or think of themselves as broken. Apparently Santa doesn’t even bother to save the toys in the original, as LifeNews reports in an excellent article (well worth a read — angry letters from children saved the day).

And that’s all I’m going to say as I put my soapbox away. Here’s the brightly, sprightly song the lonely toys sing, at strange odds with their predicament — they truly have no hope for themselves. It’s remarkably subversive, and I love it:

In sum, I’d posit that strange is memorable and fun, sticking to the nooks and crannies of the brain moreso than taking more expected  route. Look at the new (1918) Grinch movie. It’ a marvel of animation, but boring. Really, really boring.

Have I missed something noteworthy and odd from your favorite holiday specials? Do you prefer the Grinch song or the Heat Miser? Please add your comments below!

The Grinch Who Keeps Stealing Christmas

chevron_left Who at RunPee Writes the Facebook Posts?
Video – How Marvel Finally Got Thor Right chevron_right