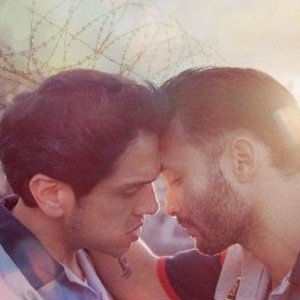 How far would you go for love?  How long would you wait for the one you love?  These are questions raised by the new movie Luz.  It’s a love story about two men who initially meet in prison.  They explore their relationship further once they’re both released.

Ruben (Ernesto Reyes) is a new prisoner.  His cell mate Carlos (Jesse Tayeh) is a hardened tough guy who initially doesn’t want him around.  Eventually, Carlos takes Ruben under his wing and teaches him how to survive prison.


Once they are both free, Ruben finds Carlos explore whether what they had is real and if it can survive in the real world.

What I love about Luz

I love the entire cast of this film.  Everyone knocks it out of the park, even those actors with non-speaking roles.  The two leads are especially compelling and have great chemistry.

Luz avoids the usual stereotypes and tropes found in many LGBTQ+ films.  For instance, it’s isn’t a coming out story, no one has AIDs or any other tragic disease, and it doesn’t have a depressing ending.

It’s not even a forbidden love story like Brokeback Mountain or Latter Days.  I like that Ruben and Carlos don’t put a name on what they have and the people around them don’t either.

I feel like it can be difficult to do an LGBTQ+ story well.  However, writer-director Jon Garcia nails it.  He handles sensitive material with dignity.  The passion and affection between Ruben and Carlos feels real.  The love scenes are tender and raw at the same time.

The story is surprising and and dramatic.  There’s an emotional plot twist halfway through.  It’s a revealing character study about two macho men who fall in love with each other.

For an indie film with a low budget, it looks amazing.  It’s one of the most polished indie films I’ve reviewed.

The movie even has a great soundtrack by the band Wonderly.

I’m adding this to my list of favorite LGBTQ+ films.  Discovering a gem like this is on among the joys of reviewing indie films.  I also had the pleasure of interviewing Jon Garcia.  Hearing the stories of how the film came together made me love it even more.  I hope you’ll check out this beautiful film.

We recently reviewed another Garcia film, Love in Dangerous Times.

Luz will have a limited theatrical run starting March 19 in cities such as Los Angeles, New York, and San Diego.  It will be available on digital and DVD April 6.