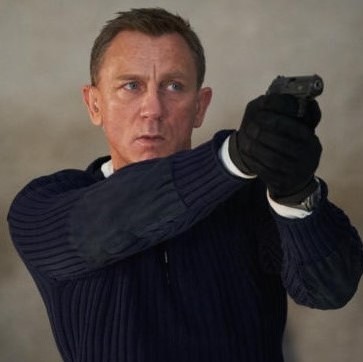 Tickets are on sale for No Time to Die — and the runtime is listed as 163 minutes (2 hours, 43 mins). That would make No Time To Die 15 minutes longer than any other James Bond movie — besides Spectre, which was 148 minutes long.

#NTtD’s release date in the USA is Friday, April 10th. However, the movie opens in many countries around the world a week earlier.

Rest assured, we will have Peetimes for this bladder bursting movie before it opens in the USA. It’s likely that we’ll have Peetimes shortly after it is released in the UK.

Here’s a chart that breaks down the length of all James Bond movies and their runtimes.

It’s interesting that 3 of the 4 Daniel Craig 007 movies have been longer than the previous longest Bond movie (On Her Majesty’s Secret Service at 142 minutes) except for Quantum of Solace, which was the shortest Bond movie of all, at 106 minutes.

Of the 4 major Bonds — Dalton and Lazenby don’t make the cut — let’s see who has logged the most minutes as James Bond.

Roger Moore has the most Bond movies and gets the most screen time, but Daniel Craig has the longest average runtime.

chevron_left Is the movie Seberg based on a true story?
No Time to Die movie posters from around the world chevron_right