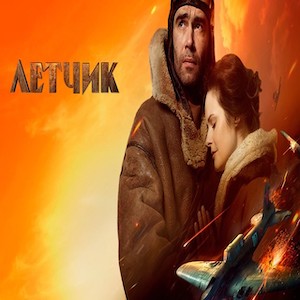 Last week I got to review my first ever Kazakh film (Sweetie, You Won’t Believe It/Жаным, ты не поверишь!); both as a viewer and as a reviewer. I said something about previously thinking of foreign films coming from either Europe or the Far East. Getting one from somewhere in between was a bit of a novelty. Then, as we Brits like to say about buses, you wait ages for one and then two come along together.

Which is, pretty much, how I felt when I was sent the link for The Pilot: A Battle For Survival/Летчик arrived. However, despite being geographic neighbours the two films couldn’t be much further apart with respect to subject matter. Whereas one film was a knockabout horror/comedy the other is an action/thriller set during the Great Patriotic War…trust me, there aren’t many laughs in The Pilot: A Battle For Survival/Летчик.


But there are action, thrills, and times of reflection. We start in Moscow in November 1941. We’re introduced to Nikolai Komlev (Pyotr Fyodorov) who, while just going about his business, comes to the assistance of Olga (Anna Peskova). Next scene, it’s December and he’s flying his Ilyushin IL-2 over the outskirts of Moscow looking for columns of advancing German troops. Sure enough, he and his comrades find a column of tanks and swoop in to spoil their day.

A Bad Peace Is Better Than A Good Quarrel

This action isn’t one sided though. Komlev and his colleagues are all shot down but he is the only survivor. Unfortunately for Komlev, though, surviving a crash landing is only the start of the story. He’s far from his own lines, encircled by detachments of Nazi soldiers,  without rations or medical supplies, and surrounded by packs of wolves. Even more unfortunately his troubles don’t stop there.

Remember earlier? I said it was December 1941. This was a period of lower than average temperatures which ultimately led to Hitler facing the same problems that Napoleonhad back in 1812…extreme cold. How cold? Temperatures plunged to -40˚C. To save you working it out, that is the same in old money…-40˚F. So Komlev had to face extreme cold, hunger, injury, wild animals, and enemy troops.

He made it back though. However, to quote the publicity material, the biggest battle of his life is yet to come. I won’t say exactly what that battle is, due to spoilers. But, if you’re really desperate to know I’ll just say that The Pilot: A Battle For Survival/Летчик is based on the true story of Aleksey Maresyev (Алексей Маресьев) and is dedicated to him and eight other airmen who were awarded the title Hero Of The Soviet Union.

Eternal Peace Lasts Until The Next War

Now I think I said elsewhere that I usually take a look at other reviews after I’ve formulated my opinions and this time is no different. However, I was surprised that a lot of the reviews were exceptionally negative. I honestly think that those negative reviews were written by people who hadn’t watched The Pilot: A Battle For Survival/Летчик! I think they must have seen a Russian film set during the war and assumed it would be a grim tale of Socialist supremacy and full of propaganda.

In fact, The Pilot: A Battle For Survival/Летчик is an adrenalin fuelled adventure. There are bad guys who might not be of quite the same calibre as Christoph Waltz’s Col. Hans Landa but they definitely struck the same chord. The action set pieces were well done and exciting. The visual effects were seamless and the acting was marvellous. Hats off to director Renat Davletyarov and writers Sergey Ashkenazi, Renat Davletyarov, and Alexey Timoshkin.

In short, if you get the chance, give The Pilot: A Battle For Survival/Летчик a look.

Indie Movie Review – Army Of One

chevron_left Is there anything extra during the end credits of Dog?
Indie Movie Review – Echoes Of The Past (2021) chevron_right