There are extras during the end credits of Dog.

At the very end of the credits is an on-screen message: in memory of LuLu.

LuLu is not a true story but is based on Channing Tatum’s relationship with a dog he rescued in 2008 named LuLu. You can read more in the movie review.

The credits run for approximately 5 minutes. 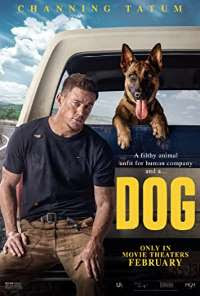 We have 3 Peetimes for Dog. Learn more.

About The Peetimes
All of the Peetimes are good and don’t involve any character development.

Two former Army Rangers are paired against their will on the road trip of a lifetime. Army Ranger Briggs (Channing Tatum) and Lulu (a Belgian Malinois dog) buckle into a 1984 Ford Bronco and race down the Pacific Coast in hopes of making it to a fellow soldier’s funeral on time. Along the way, they’ll drive each other completely crazy, break a small handful of laws, narrowly evade death, and learn to let down their guards in order to have a fighting chance of finding happiness.