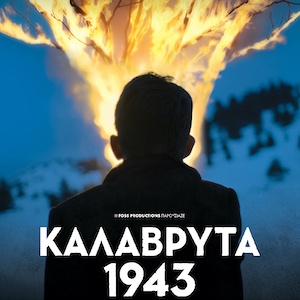 Let me get something straight right from the start. Echoes Of The Past was quite hard work. Not because it was badly made or acted but because it was based on a true story that was one of the most appalling examples of humanity or, more accurately, the lack of it: The Kalavryta Massacre (Σφαγή των Καλαβρύτων).

In December 1943 a mission was begun by 117th Jäger Division of the German Army known as Unternehmen Kalavryta (Operation Kalavryta). The aim was to surround and wipe out the Greek Resistance. During the operation seventy eight German soldiers being held hostage were executed by their captors.

War Does Not Determine Who Is Right Only Who Is Left

Echoes Of The Past is framed in a story of a multi-billion euro claim for war reparations being launched by the Greek government against the German government. At the risk of the real world butting in, the actual claim is for €279bn. Caroline Martin (Astrid Roos), is a high-flying lawyer representing the German government who visits Kalavryta to investigate the claim.

As part of her investigations she meets with the last Greek survivor of the tragedy, Nikolaos Andreou (Max Von Sydow in his last role). The story is told by a series of intersecting scenes alternating between the present day and the events of World War II which has Nikolaos played by Maximos Livieratos.

The brutality and inhumanity of the Nazi army is well known both in terms of dramatisation and documentation. Despite that, seeing yet more examples being portrayed never becomes easy to watch. It is slightly tempered by the inclusion of the “Good German” doing the right thing but, really, it is much too little and way too late.

Only The Dead Have Seen The End Of War

As the men and boys of Kalavryta are being marched off to be executed, there is cut from the face of young to old Nikolaus; Max Von Sydow is heart breaking in the way that he projects the fear and torment that has been building up inside his character for seventy plus years. He was a master of his craft and will be sorely missed.

So, Echoes Of The Past can hardly be called entertainment but it is engaging, engrossing, and disturbing. It also asks a lot of questions which, while not actually being rhetorical, are hard to answer. The heartless behaviour of the Nazis has been told many times before; occasionally better, occasionally worse.

Ultimately though, if only as Max Von Sydow’s valedictory piece, Echoes Of The Past deserves seeing.