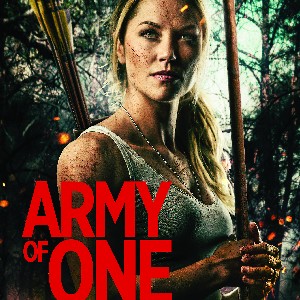 Army Of One came as quite a surprise. Reviewing independent films means you get used to watching people you’ve never seen or heard of before.  You see a lot of poorly arranged shots, bad editing, dodgy stunts and effects, and some definitely suspect acting.  Army Of One was a different kettle of fish. Was it perfect? No, but it was far from a wasted hour and a half.

The story behind Army Of One concerns a husband and wife who are on holiday to get away from things, following a botched police raid. They haven’t even found the beaten track — let alone got off it — before things start to go wrong. A run in with some local yahoos leads to some posturing and chest beating, but the bad guys get called off by (of all people) their mother. Events take a turn for the worse, via a pretty big plot hole, when her husband ends up dead and she goes out for revenge.

The couple in question are Brenner and Dillon Baker, and they are well played by Ellen Hollman and Matt Passmore. Hollman does particularly well with what she’s given, and I’m looking forward to how she does in the upcoming fourth Matrix outing. Things are shot well enough that I can’t “see the join” if she was replaced by a stunt performer but, if she wasn’t, then the girl can do a convincing action scene!

Other notable “faces” include Geraldine Singer, as the deliciously evil Mama, who I saw recently in Green Book and Get Out, which are both worth a look if you haven’t already done so. The rest of the cast seem to be semi-permanent features in a range of TV series and films which some of you may well have seen: Lethal Weapon, Spartacus, Guardians Of The Galaxy 2, John Wick Chapter 2, Supergirl, and Mad Max Fury Road — to name but a few.

Indeed the on screen talent all perform more than adequately. The acting is good, the visuals are well shot, and the effects are mostly believable. The problems arose with some of what made the final cut. For instance, on the RunPee app there is a “running late” feature where we précis what happens in the first three minutes, so you can catch up if you’ve been, say, caught in traffic or had trouble parking.

For Army Of One I’d be tempted to just say “don’t worry about it” as the first four minutes are a flashback to Dillon’s workplace incident that got them the time off. As he’s more of a MacGuffin than a character, his trauma could have been addressed in a ten second bit of exposition. I’m not going to worry unnecessarily about the wound dressing… honestly, did they really think that a small abdominal wound needs a bandage wrapped around the torso?

Then there’s the plot hole I mentioned. It’s hard to say too much without wandering into a minefield of spoilers, but the incident that leads them into the pivotal peril situation surely wouldn’t have happened. I can accept them entering a property to shelter from the elements, but the illegal search that leads them into trouble? They are supposed to be the good guys on the side of law enforcement; they shouldn’t have behaved like that and it wouldn’t have required much script tweaking to get them to the same dramatic point.

And who puts the big boss fight in the middle? Still…