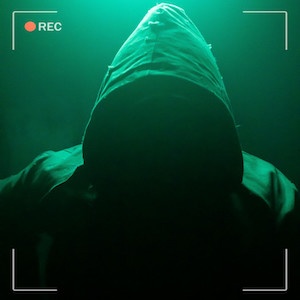 Stoker Hills is one of those films which is a bit like watching a drunk octopus juggling; there are all manner of things up in the air and you’re never sure where and when they’re going to land. There were some good things, some less than good things, some interesting, some not so interesting.

First off is the shot that tells us what’s going on. Stoker Hills is one of the “found footage” sub-genre. After the studio idents there is an almost abstract shot of a flat service reflecting some blurred, flashing lights. A few seconds later and a fireman’s boot steps into frame showing an extreme Dutch angle.


The fireman has seen that the camera was dropped and picked it up. We then fast rewind through the footage that has been shot and, even though the scene only lasts about twenty seconds, there is a fairly constant stream of violence and mayhem. The end point is in a lecture theatre, sitting a few rows back.

Giving the lecture is Tony Todd, one of the very good things about Stoker Hills. As soon as you see Tony Todd you know that you’re in for something interesting. He is Professor Smith and is delivering a lecture on film makers and techniques. Unfortunately, the lecture is over in under five minutes and we don’t see much more of Mr Todd.

For me, it was a reminder of missed opportunities. About eighteen months ago I got the chance to review a film called Immortal. Along with the chance to watch and write about it there was a chance to interview none other than Tony Todd himself! Sadly, Immortal was only the third independent film I’d reviewed and I’d never interviewed anybody, let alone a genuine star, so I panicked and missed out.

Anyway, back to Stoker Hills. After Professor Smith’s lecture the story starts properly. It is about a group of film students and they, obviously, they have to make a film as part of their coursework. This introduces us to the usual group of middle aged actors playing teenage students. To be honest, though, they aren’t too bad; I’ve seen worse!

The directors of Streetwalkers, a cross between Pretty Woman and The Walking Dead, are Ryan (David Gridley) and Jake (Vince Hill-Bedford), and their star is Erica (Steffani Brass). The star pupil of the class, and their rival, is Dani (Tyler Clark).

Then there is the usual students buggering around making a film scene complete with concerned parent making his views clear about his daughter playing a prostitute. So far, so very much like so many other films. Then things go wrong and the video camera ends up in the hands of the investigating officers.

They are Detective Stafford (William Lee Scott) and Detective Adams (Eric Etebari). They roll back through the, as yet, unseen footage and start retracing the events of the previous evening.

From then on the story is, very much, one that has been seen many times before. Despite that Stoker Hills is well worth a look. There are the inevitable “don’t be ludicrous, they wouldn’t do that” scenes but they aren’t as outrageous as some I’ve seen and do, kind of, fit in with the overall feel of the film. I must admit that the ending did come as a surprise. Obviously, I’m not going to spoil it for you but it was a turn up for the books!

chevron_left MCU Disney+ Review – Loki
Is there anything extra during the end credits of Morbius? chevron_right