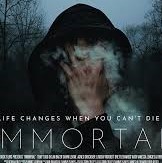 Immortal is a compilation film; four shorts that all share the theme of someone being, well…immortal. There’s no link between the segments — other than at least one of the protagonists in each part can’t die, regardless of what they try to do.

Each of the various parts are all equally well done in terms of acting, story, and direction.  There are a few niggles here and there, but nothing that the “willing suspension of disbelief” can’t handle! Despite the darkness that necessarily surrounds a film that is, by necessity, littered with deaths, there is a vein of humour running through.

The segments are populated by psychopaths, plotters, deceivers, and ordinary people who are unaware of their ‘condition’ until after they’ve met their ends.


Dylan Baker starts off the first section as a teacher with a secret. I’ll be honest and say I had no idea of the direction the film was going in, and the trail was well hidden. Hints were cast in different directions, and when the actual theme of the whole four stories is made clear it does come as quite a surprise.

A plan is drawn up, there is a snag which gets resolved, and there is a twist. You know something isn’t going to go the way it should, but I’ll admit to being surprised by the ending!

The third section is the most bittersweet. I don’t want to say much for fear of spoiling it, but Tony Todd and Robin Bartlett are wonderful; if the whole film had been devoted to them and their story I wouldn’t have complained. I really did enjoy Tony Todd’s stellar performance, which is somehow both different and similar to roles he’s shined in before.

The final act is an unusual revenge tale — nicely done.

My biggest query (complaint would be too strong) is that there is no explanation as to what caused the immortal condition, and what happens to the characters afterwards.

Still…entertaining enough for me! Recommended.

chevron_left Better than Popcorn – Low Carb Nut Bowl snacks for movie night
Covid news: What to expect when you return to the movie theater chevron_right