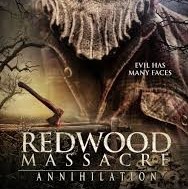 So… a group of bereaved family members are contacted by some random guy who says he knows what happened to the dead people, and they all trot off to the Scottish countryside to solve the mystery. Obviously it doesn’t go too well, as there’s a wrong ’un in amongst them. The carnage begins and then carries on and on and on.

All kinds of gore!

And they don’t skimp on the gore…victims are eviscerated, decapitated, and generally hacked, sawn, and chopped to pieces; if you like that in a film, then you’re in for a treat.


Personally I prefer something, well, different. There were moments of tension, but then there were moments of high stupidity. Right at the beginning, the psycho doing the killing drags a woman onto his killing table and raises his knife. She pleads for her life using the words like “pretty please”… I’m not American, so I don’t actually know if moments of bowel loosening terror bring out that sort of vocabulary, but I’m confident it’s not a phrase I’d use.

And later on, the crew is deep inside the facility with the killer in it. They’ve already found multiple bodies in various states of decay and dissection, so they are definitely aware of the danger they’re in. But then there is a scene where the big guy who is the bodyguard is talking to one of the two women. Off-screen, we hear the other woman shouting, “I need your help,” to which the obvious response is for both of them to jump up and find out what is wrong. But, no. He shouts back, “Give me a second,” and they carry on with their conversation.

Little things like that aside, Redwood Massacre: Annihilation is well made and well acted.

Well, apart from one thing that really got to me… the music. When done properly, music in a film is hardly noticed. You can tell the difference if you hear a clip twice, once with music, and once without. But when it is done really well you can think back and struggle to remember if there was any music or not. For almost the entirety of this film there was a repeated, pseudo-classical them played over and over. It could almost have been stock music just added as a filler; the end credits only listed the two tracks which were played over the end credits. Anyway, it was repetitive and started getting really irritating.

But, music aside, Redwood Massacre: Annihilation was a reasonable brainless bit of nonsense to eat popcorn by. Sadly, it just wasn’t my thing.

Benefit of the doubt — C+