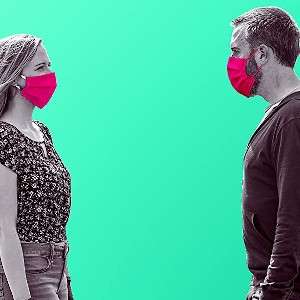 Now, before the shouts of “there’s the bandwagon, get on board quick” start, let’s just be honest and admit we all knew that a whole pandemic/COVID-19/lockdown-themed genre would be arriving before too long.

Love In Dangerous Times isn’t the first one that I’ve seen though; that honour goes to the brilliant Staged, starring the magnificent duo that is David Tennant and Michael Sheen. However, as it’s a made-for-TV thing it doesn’t get many mentions here at RunPee Towers.

So, back to Love In Dangerous Times. Here we have a guy, Jason (Ian Stout) who finds himself living alone during a pandemic; the name of the disease isn’t mentioned, but the film is set around about the present day — footage of the BLM protests following the murder of George Floyd is included.

Whether his lack of social contact has made him awkward or if it’s his natural state isn’t addressed, but the opening scene is of him having an online chat with a woman. All seems to be going well until he asks to see her “boobies” — which is immediately followed by the sound of a Skype call being disconnected.

A big difference between Love In Dangerous Times and Staged is that, as far as I can tell from the image quality, Love In Dangerous Times is mainly shot with ‘real’ cameras rather than the Zoom recordings used for Staged. Another type of shot which is well used here is the aerial establishing shot. These shots are going to become more common now that the ubiquitous drone, which means filmmakers don’t have to spend fortunes on helicopters. Meanwhile, just enjoy drone shots while they still feel fresh.

One thing Director Jon Garcia made good use of was the empty city streets, caused by people working from home, facilities being closed, furloughs, lockdowns, etc. I do remember back in April and May how eerily quiet it was when you stepped outside your front door. I’m a couple of hundred metres from the nearest even remotely busy road but I’d never noticed the noise from it…until it stopped.

Mr Garcia manages to get that feeling, which makes the counterpoint of the aforementioned protests even more striking.

Jason is in the majority of the scenes in Love In Dangerous Times and he does a fine job bearing the onus of carrying the film, with the assistance of a few cameos featuring friends and family. At least he does, until we get a third of the way in when Sorrel (Tiffany Groben) is introduced via a dating app, when they take up the mantle together and the “will they/won’t they” is replaced by a pandemic era “can they/can’t they.”

Obviously the scourge of spoilerdom prevents me from saying how everything develops.

I will say there are a number of threads which are picked up and followed, which fits in with the expected Plague 2.0 storyline. So…who catches what, who lives, who dies, do relationships flourish, do plays get written? You’ll have to watch and find out!

I enjoyed it and advise you to give it a look.