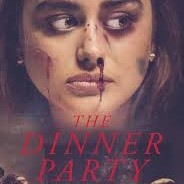 I was quite looking forward to seeing The Dinner Party after I saw the trailer and, to be honest, I wasn’t disappointed.

It all revolves around the titular dinner party, which is being held by some local power brokers. A playwright, who wants his latest effort produced, has come along with his wife to try and get the rich folk to smile on them and launch buckets full of money their way.

You know there’s going to be problems when one of the hosts insists on all mobile phones being surrendered, and keeps on describing it as a ‘secret’ dinner party. When the budding playwright says that they’ve kept it so secret that they told their family and friends that they were going on holiday, you know that he won’t be walking out of there.


It was beautifully shot. Atmospheric and artfully lit, it reeks of an aura of tension from the beginning; you know something is going to happen but what?

Are we dealing with vampires, psychopaths, human organ sellers, or people hunters?

You’ll have to watch and see!

It was very well cast. There were no faces that I recognised, but that’s not unusual for an independent film. At least this cast could act! One guy’s accent seemed to waver between the American Deep South and Australia but that settled down fairly quickly. Jeff and Haley (Mike Mayhall and Alli Hart) were believable as the putative victims and the hosts were all delightfully oleaginous. My particular favourite was Sebastian played by Sawandi Wilson… delightfully louche and obnoxious!

The setting was very nice. I’m not sure if they borrowed a big posh house to shoot in or made a load of sets, but it was very believable as the home of someone rich and decadent. I mean, one should really have a nice large water feature to fight in!

All in all an entertaining way to pass a couple of hours.