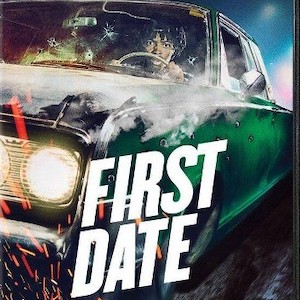 You always have to take how the studios describe their new releases with a pinch of salt. Let’s face it, they do have a dog in the fight and want to see it do well. Sometimes they try and claim a link to greatness; written by Robert De Niro’s gardener for instance. Other times they’ll oversell a brief appearance; starring someone from Star Wars/Trek/Gate but they are actually only in it for thirty seconds. Perhaps it’s more honest just to say what the film reminds you of, what genre you’d put it in, whether it makes you think of another film or director.

And that’s the approach that the publicists behind the UK release of First Date have taken. They’ve gone for “Tarantino-esque” as a description. Now, you’ve got to have missed every film released in the last thirty years to not be aware of just how big an accolade that is. Love him or hate him, but Quentin Tarantino has had a profound effect on the world of cinema; a combination of self-awareness, hero-worship, and skillful product placement which has led to made-up products becoming almost as famous as the real things are just a few of his defining characteristics.


What Did You Call Me?

So does First Date live up to the Tarantino-esque soubriquet? Now, bear in mind that these are early days for the team involved both in front of and behind the camera. Having said that, are we in a position to compare First Date to Reservoir Dogs? Let’s be honest, Quentin Tarantino is, most definitely, a one-off; a textbook definition of catching lightning in a bottle if ever there was one. A direct comparison is, therefore, a bit unfair.

What is fair to say is that there are some similarities. Sharp dialogue, well-drawn characters, and quasi-surreal situations are just some of the lines of comparison that can be drawn. Throw in a believable cast and you can see that we’re well on the way to having everything needed for an enjoyable way to pass an hour and three quarters.

Very briefly, the story centres around teens Mike and Kelsey (Tyson Brown and Shelby Duclos) trying to get together for nothing more exotic than a first date. Being set in the USA means that the thought of a teenager going on a date without a car is simply impossible. Mike ends up being tricked into buying an old banger. As is the way of things in Filmland, the car has something else going on with it.

The car was previously used by what seems to be a highly productive drug ring judging by the amounts of cash and product that appear later on. As is the way with the necessity for the story to proceed, there are a number of people, or groups of people, who are after the car now that it has been sold; some corrupt cops, a vicious, but literate, drug gang, and a crazy cat woman with an enthusiastic yet undisciplined approach to self defense.

All round, the casting was excellent, especially with regards to the leads. It is refreshing to see people playing teenagers who are believable as teenagers — rather than the usual thirty year olds who get asked for ID when buying booze off a particularly myopic checkout assistant but can’t stop telling everyone they meet for the next week and a half.

So I’ll say that First Date definitely has the seemingly chaotic, peri-random plotting of a Pulp Fiction but it also should be borne in mind that there is more than just a whiff of the Coen Brothers as well; particularly Raising Arizona and Fargo.

Well worth a look if you get a chance.

Indie Movie Review – My Summer As A Goth