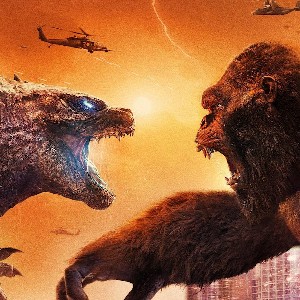 Godzilla vs Kong opens next week and at RunPee we’re very excited. Kong, the King himself, has a very special place in our hearts, since when RunPee Dan and I saw Peter Jackson’s King Kong in 2005 we came up with the entire idea for RunPee (go during the Valley of the Bugs scene — you won’t miss a thing).

We also like creature features with ginormous critters rampaging through metropolitan sprawl, rendering skyscrapers to rubble. Which  — BTW — WHY cities all the time? Does it have to be a fight in a major metro downtown? It’s a big world. How about something we haven’t seen before? Like a fight between behemoths in the Grand Canyon? On ice sheets off Greenland under the northern lights, or tramping across islands in a Caribbean archipelago. Chase each other around the tops of the Himalayas. With creatures so big they could really go wild.


Of GvK, Dan reports, “I believe the main fight takes place on an aircraft carrier. I read that it’s 18 minutes long.” So, okay. Well, we’ve seen a helicarrier final fight (see: Deadpool), but I do think an aircraft carrier at sea might be new. Have we seen that somewhere before? It seems familiar from something. Pacific Rim? You tell me.

But with a sequence that long, if its not entirely amazing, there might be a Peetime somewhere in it. Just saying.

Let’s not have either one die, OK?

Man. I don’t want to see either Godzilla or King Kong die. Nobody does.

How to resolve this? The cliché would be a common enemy arrives and they fight it off together. But I don’t want another cliché movie. I hope they can write something better than that. That said, I do agree with Dan’s response to my whining: “I’m going to guess that it will end with them fighting together against a common foe. Cliché, sure. But epic.”

As a professional editor, I necessarily don’t mind a cliché… if it’s done well. So I’ll hold out hope for that. I think the GvK trailer implies that something is provoking Godzilla, so maybe he’s infected with a virus (Covid!). Or he’s out of his mind due to environmental change. Either way, the tiny humans can step up and help poor old Zilla. There could be some real pathos mined.

We’ve faithfully watched and reviewed every modern Godzilla, King Kong, and adjacent Kaiju story, so if you’d like to get up to speed before theaters and HBOmax showcase Godzilla vs Kong, here’s our running list to help you get there.

I thought the movie fell way short of being awesome. This is a GODZILLA. I don’t want a good movie. I want a “Holy cow did you just see what Godzilla did?” movie. I got that feeling exactly once.

Did this movie do Godzilla right? Yes, better than the previous Godzilla. How’s that for a ringing endorsement? (It isn’t.) At this point the makers of Godzilla are knee-deep in what they call a Monsterverse. 2014’s Godzilla was the first in this shared universe, and the story blows past Kong: Skull Island, and on to a multi-mega-monster-lineup, and eventually, a mono-a-mono between the leading beasts.

There have been many King Kong movies over the decades, yet people are still fascinated by the idea of a gargantuan gorilla. This movie at least has some original themes, focusing entirely on Skull Island, and forgoing the New York plot entirely. Neither is there much ado between Ape and Girl – which, honestly, was fine by me.

No one watches mega monster movies expecting Inception level plot twists. We watch to see monsters eff each other up and lay waste to a cities the way politicians lay waste to the truth. Based on that criteria, Godzilla: King of the Monsters is completely satisfying and ends with a “money shot” worth the price of admission.

A Godzilla Newbie Watches King of the Monsters (2019)

I’m happy to admit Godzilla: King of the Monsters is the best one yet. Not only did the big beasties get plenty of screen time, but the people plots didn’t entirely suck. People and entire cities can be megafauna fodder in disaster films, but there also has to be a thoughtful human element where you care.

Kong – Skull Island is the second movie in the Monsterverse. It features a cut-scene at the end of the credits where the main characters are told Kong is not the only monster, and then shown archival footage of ancient cave drawings of Godzilla, Rodan, Mothra, and a battle between King Ghidorah and Godzilla.

In a recent binge watch, we’ve rewatched and ranked all the creature features with the radioactive overgrown lizard, in and out of the current shared Monsterverse.

Movies about giant creatures that aren’t in the “Monsterverse” but are worth rewatching to get you pumped for this movie:

Peter Jackson, coming off the high of his seminal Lord of the Rings saga, was permitted to make a really, really long love letter to Kong, King of Monster Mammals. His big ape movie went on and on and on…for 3 hours and 7 minutes. And thus RunPee was born.

I think it’s time to move past Monsters As Bad and say, “We did this. Now what are we going to do about it?”

Where PR2 gets it right is the plot. Let’s face it: the plot in PR1 was crazy ridiculous, to the point of being a farce. But they didn’t dwell on it, and more than made up for it by presenting fight scenes that puts the best of Transformers and Godzilla to shame. PR2 actually nails the plot. It makes complete sense and fits perfectly in the existing story framework.

I wasn’t sure if this was a Kaiju film worth mentioning here. George is a form of Kong that is actually upstaged by The Rock. Who is the bigger beastie?

Who do you think?

There’s a reason why nominal lead actors in Godzilla/King Kong films are not usually cinematic bigs.

Still, rewatch this one if you want to catch another giant ape doing thrilling heroics in a decent creature feature actioner.

Go see Godzilla vs Kong as big as you can (but be safe!)

Remember, Godzilla vs Kong will be 1 hour and 53 minutes, so bring the RunPee app to get your Peetimes. If you use normal Covid health precautions in the theaters you should be safe to get out there again. For a movie featuring gargantuan beasties, we recommend you make this a big screen occasion.

Godzilla vs Kong will be shown Wed, March 24 in theaters and on HBOmax. Here’s the trailer to get you pumped (and it does look awe-inspiring). Or give a listen to the Blue Oyster Cult Godzilla remix to get you in the mood!