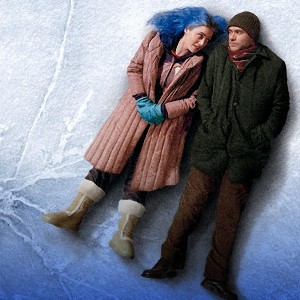 Here we go with another film that, for some unknown reason, I’ve never seen and am not sure why. At least this one’s relatively recent; I still haven’t seen Citizen Kane or The Sound Of Music!


Could it have been the sub-par cast? Nope! Any film with Kate Winslet in gets a watch: I remember watching her in the mid-nineties as a relative newcomer, in a film by a New Zealand-born film director who was starting to get established, and I’ve seen most things of hers since. Oh… Heavenly Creatures and Peter Jackson, if you’re wondering. Maybe it was Jim Carrey playing it straight? Again, no… The Truman Show is one of my all-time favourites.

Throw in cracking performances by Kirsten Dunst, Mark Ruffalo, and Tom Wilkinson, and there’s really no reason why I shouldn’t have seen it. Even Elijah Wood, who in my humble opinion has a permanent face like a slapped arse, is tolerable. So acting talent isn’t the problem.

What about the director? I have no problem with French directors — my adoration of all things Bessonesque is well known — so I wouldn’t have avoided it due to it being made by Michel Gondry. I’ll admit that I hated Be Kind Rewind, but that’s more than somewhat to do with Jack Black being in it. Also that was still nearly five years in the future.

In brief, Eternal Sunshine Of The Spotless Mind is about a couple who have a falling out and wish to be done with each other. Fortunately for them there. is a company called Lacuna who specialises in removing selected memories. So, if there is something that is irritating you and you can’t stop thinking about it, they can just whip it out. Lacuna is a bit like an inverse of Rekall from Total Recall, in that they go in and remove specific memories, whereas Rekall puts new ones in. I have to admit to being a bit tempted by that idea… It’s been over fifty years, so why do I still blush from my toenails up when I remember some faux pas from my teens?

I think it’s fair to say that both Joel Barish (Carrey) and Clementine Kruczynski (Winslet) have a screw or two loose. In fact there are times when it seems that the whole Meccano set is rattling around like peas in a drum. So, unsurprisingly, Joel starts having mid procedure wobbles and doesn’t want to lose all of the memories — perhaps just enough to make the pain stop.

I know it’s a work of fiction, but you do wonder what checks and balances are in place for what boils down to cerebral reorganisation. Perhaps that’s down to the guy in charge (Dr Mierzwiak – Tom Wilkinson) being a bit of a tinker and using the process to cover up his previous indiscretions. or one of the staff (Patrick – Elijah Wood) stealing memories so he can swoop in and use them to seduce the patients’ ex-partners.

Unlike Groundhog Day, Eternal Sunshine Of The Spotless Mind is not a repeat/until loop. It’s more a collection of memories accessed at different points along the non-sequential narrative.

So, does that make it impossible to follow? Well, I do think it benefits from a few re-watches. The big giveaway is Kate Winslet’s hair, which changes colour seemingly at random… spoiler: it’s not random! In short, green is for their first meeting, orange is when they are deepest in their affair, blue is after the memory cleanse, and red is for fantasy sequences.

So, there’s all that… anything else? Well, the title is from an eighteenth century poem by Alexander Pope. “How happy is the blameless vestal’s lot! The world forgetting, by the world forgot. Eternal sunshine of the spotless mind! Each pray’r accepted, and each wish resign’d.”

Oh… the opening titles made me jump. They don’t start until over a quarter of an hour into the action and I’d forgotten that there hadn’t been any. Still, I wish I’d seen it before and I know I’ll be watching it again.