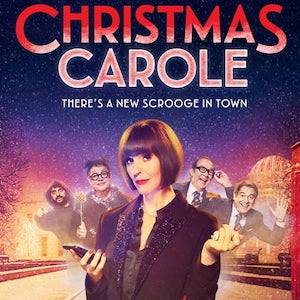 It seems a bit obvious but, just in case you didn’t get here via the Scrooge/Christmas Carol hub, this is a modern day reinterpretation of A Christmas Carol. Christmas Carole sets the story in the present day with Scrooge being replaced by the eponymous Christmas Carole MacKay (Suranne Jones).  The rest of the story is, pretty much, the same…obviously! Ghosts take it in turns to scare rich people until they start being nice to their employees.

This time round Carole MacKay has made her fortune by selling cheap and nasty Christmas tat. She knows it sells well because it doesn’t last five minutes and has to be replaced. Her Bob Cratchit is her harassed personal assistant Bobbie Singh-Cratchit (Taj Atwal). Bobbie is fired on Christmas Eve because she wanted to go home to her family rather than bring Carole her tablets.


How Could I Be Happy When We Were So Poor?

Still, she would have been fired anyway when Carole sells her company to Limpopo, the giant on-line supplier of, well, everything. Yes, Limpopo the company rather than the river in Africa. You don’t need an ‘A’ Level in geography to get that reference. The buy out is set to be announced just after midnight on Christmas morning. This means that all her employees wake up on Christmas Day to find that they are unemployed. Obviously, the ghosts have to do their respective bits to make sure that there is a happy ending.

First up is Jackie MacKay (Rosie Cavaliero). This time, the ghost is Carole’s dead mother rather than her business partner who has remarried and is now Jackie Marley. During the haunting scene Jackie shows off some plastic surgery that was guaranteed non-biodegradable which made me wonder what they could make Death Becomes Her look like if they remade it now. Jackie tries to give the warning of the three visitations but, as in Spirited, the joke is that she knows the story already.

How Could You Be Unhappy When You’re So Rich?

The Ghost(s) of Christmas Past are Morecambe and Wise (Jonty Stephens and Ian Ashpitel) who I had the pleasure of seeing live doing their tribute to the double act. To a Brit of a certain age Morecambe and Wise are the perfect embodiment of Christmas. They are as evocative of Christmas as crusty bottles of advocaat, paper decorations, and the Christmas and New Year double edition of the Radio Times! One of their Christmas specials had a song and dance routine starring Angela Rippon; one of the first regular female BBC newsreaders. They did quite a fun recreation of it!

The other two ghosts are also comedians. This time, though, they are ones that are, very much, alive and kicking. Christmas Present is played by national treasure Jo Brand; she used to be an NHS Psychiatric Nurse before moving to stand up. Christmas Yet To Come is Nish Kumar; he started performing in University and hasn’t looked back. To my mind he will become a national treasure before much longer. Incidentally, he is deliciously spooky when he does the hooded, silent point towards a grave!

Only a little over an hour long but a fun addition to the Scrooge catalogue.

chevron_left Movie Review – The Amazing Maurice
Moving to the Top: The Boom of Table Games chevron_right