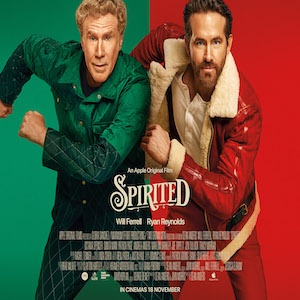 Same as buses! Wait ages for one and then they all start to arrive at once. So it is with Christmas films. Last week I had a look at Christmas In The Caribbean and now I have to add another to our Christmas film hub…Spirited. Apple Studios have produced a new adaptation of A Christmas Carol. This version, though, is somewhat different. It is a musical, which has been done before. It is a comedy, which has also been done before. However, I can’t recall a previous attempt at a Scrooge based musical/comedy.

Just as I tend to find Kiera Knightley and Natalie Portman interchangeable so I also have problems telling the Ryans, Reynolds and Gosling, apart. Now, I’d like to make it clear that I hold all four of those actors in the highest regard. Perhaps it’s just my advanced years and failing eyesight. Anyway, I wondered what all the kerfuffle was about Ryan Reynolds being in a musical. Didn’t he do all that in La La Land? Anyway, I sorted myself out and sat down to see what Spirited had to offer.

As well as Ryan Reynolds there is also Will Ferrell and Octavia Spencer adding their talents to the proceedings. I have to admit that, given the line up, I was a bit apprehensive about what the quality of the finished article would be like. I mean, Ryan Reynolds, Will Ferrell, and Octavia Spencer are all talented actors with a wide and respectable range of work behind them. But, when it comes down to it, can they really pull off all the singing and dancing required in a musical?

Turns out that I needn’t have worried. While they might not have the greatest or strongest singing voices they are all quite acceptable. Not so long ago you would have just thought “Oh, they’re not too bad!” Unfortunately, nowadays there is always the lingering spectre of Auto-Tune but I’m hoping that Ryan Reynolds got his old mate Hugh Jackman to give him a few tips on knocking out a tune. I’m also guessing that the leaping around as Deadpool gave him some skills that could be transferred to dancing.

The Perfect Combination Of Mussolini And Seacrest

All in all, Spirited is a jolly Christmas offering; nice tunes, good choreography, a heartwarming feel, and some good laughs. It has the feel of everyone being professional but, at the same time, not taking things too seriously. For instance, Judi Dench has a cameo and, immediately afterwards, Will and Ryan break character and say “Was that really Judi Dench?”, “Oh, she’s a national treasure!” There are also jokes about product placement, pandemics, and endless adaptations of A Christmas Carol.

If that isn’t enough, there’s a spirited tribute to those street filling song and dance numbers that take up all the cast and remind you of Oliver! or My Fair Lady. Just to round things up…Ryan Reynolds is Clint Briggs (the Scrooge equivalent), Will Ferrell is Present (as in the Ghost of Christmas…), and Octavia Spencer is Kimberley (Clint’s VP and the Bob Cratchitt equivalent). It could well become one of my Christmas regular watches.