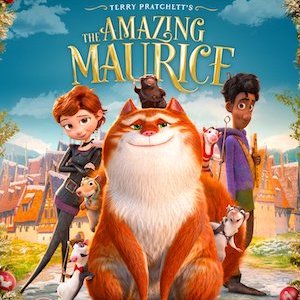 It’s the end of the Christmas holidays. My good lady wife and I find ourselves tasked with looking after our granddaughter, Alice. Alice is nine, going on 36, and starting to hit that time of life when you need to check everything; she gets annoyed if we park in a “Parent and Child” slot, insists on ordering her own sandwich in Subway, and no longer wants the kid’s snack pack at the cinema. Having said all that, she can still be found sucking her thumb while hugging the moth-eaten, threadbare stuffed dog she has had since birth.

Like me, Alice loves a trip to the cinema so we decided to go to a local café for a late  breakfast and then go and see what was on. The downside of going at the end of the school holidays is that every club she’s in, as well as her school, has been out for a holiday treat and this is usually a trip to the cinema. As a result she’s seen all the age appropriate films on offer…apart from one. The Amazing Maurice was released on the 16th of December so just missed being swept up in the outings organised by school, Brownies, gym club, choir, etc.

Now I don’t want you thinking that we went to see The Amazing Maurice because there was nothing else to see. I’ll admit to being a fan of the works of Terry Pratchett, particularly the Discworld series of which this is a part. I’d also seen Hugh Laurie on the TV promoting the film along with a clip and I thought it all looked like fun. The original story (The Amazing Maurice And His Educated Rodents) was the first Discworld novel written for children so it could have been aimed straight at Alice.

As I said earlier, The Amazing Maurice is set in the Discworld universe but it is a standalone story. Also, while being set on Discworld, you don’t need to know anything about its nature or science. You can walk straight into this story and all you need to accept is that there is such a thing as magic! That aside, it is packed with Easter Eggs aimed at the fans of STP…cameos by The Luggage, Rincewind, and Twoflower, the picture of Great A’Tuin, the bust of PTerry, and a copy of Twurp’s Peerage all meant that I really need to see The Amazing Maurice again to try and spot more! Quite touching was the final credit – GNU Terry Pratchett. If you know, you know.

So what is The Amazing Maurice about? The TL:DR version is that it is a retelling of The Pied Piper Of Hamelin. The Pratchett twist comes about with the eponymous Maurice and  his team of rats. Maurice and the rats all come from the city of Ankh-Morpork. They had started out as normal creatures scavenging on the waste from Unseen University; where wizards are trained. All the magical rubbish increased their intelligence and they decided to go off and make a living by terrorising local villages. The rats would infest a hamlet, Keith (a human) and Maurice (a cat) would turn up and lure away all the rodents à la The Pied Piper. They would get paid, go off to the next place, and start again. Until, that is, they reached Bad Blintz where there is something more going on!

As with most animated films, a lot comes from the voice talent taking part. The Amazing Maurice is very well served by the cast who seem to have grabbed the opportunity to let off some lockdown steam and have a great time recording their parts. They include Hugh Laurie (Maurice), Emilia Clarke (Malicia), Himesh Patel (Keith), David Thewlis (Boss Man), and Hugh Bonneville (The Mayor). The rats include David Tennant (Dangerous Beans), Gemma Carterton (Peaches), Joe Sugg (Sardines), Arizona Bakare (Dark Tan), and Julie Atherton (Nourishing).

A must for Pratchett fans!

Movie Review – Soul (Pixar and Disney get it right, again)

chevron_left Is there anything extra during the end credits of M3gan?
Christmas TV Movie Review – Christmas Carole chevron_right