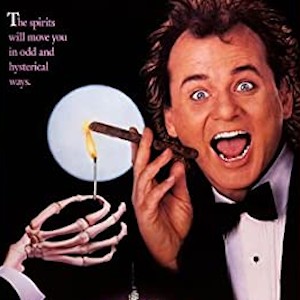 Scrooged is A Christmas Carol dragged kicking and screaming into the modern world… well, the late eighties anyway.

Bill Murray is Frank Cross, the Scrooge character, but in this world he’s a cynical TV executive. He’s tasked with making sure his Christmas spectacular grabs the biggest share of the audience, and he wants to do it by making people too scared to miss it, so he throws out the traditional readings, carols, and, erm, Mary Lou Retton as Tiny Tim — and throws in explosions, screaming, death, mayhem, drugs, and terrorism.

He’s quite happy to fire Eliot Loudermilk (Bobcat Goldthwaite) especially when his PA, Grace Cooley (Alfre Woodard), reminds him it’s Christmas Eve and he can stop his bonus. One of the signs of the age of the film is the company gifts; branded towels for the lower levels and a “VHS Home Video Recorder” for the upper levels.


It says something when they have to say more than just “VHS” to make sure the audience know what they’re talking about.

Did You Try Staples?

There’s no point worrying about spoilers with regards to the story… it is A Christmas Carol from start to finish. There are the ghosts, the neglected employees, and the family. The role of Bob Cratchit falls to Grace, and her son (the Tiny Tim of our story) has a medical problem in that he can’t speak. Instead of Marley’s ghost, Frank is visited by his old boss Lew Hayward (John Forsythe).  Rather than the dodgy food (‘more of gravy than of grave’) Frank blames Chernobyl poisoned vodka.

The Ghost Of Christmas Past is a demonic taxi driver, played by David Johanson with unrepentant glee. Frank is whisked back to his childhood, which shows us that his main source of emotional growth was the TV.

This leads him to put his work before all else, including the love of his life, Claire Phillips (Karen Allen), who he drives away. The Ghost Of Christmas Present is played by the delightfully batty Carol Kane.

I Want To See Her Nipples

The rest of the story plays out as per the book. Frank sees the Cratchit/Cooley family having a wonderful Christmas, despite having no material benefits. They have less money than Frank probably spends on ties, but they have way more fun. The same is true for his brother who is entertaining his friends in a somewhat shabby flat but, again, having fun and enjoying the company.

Throw in cameos from — amongst others — Lee Majors, Miles Davis, John Housman, Robert Goulet, Buddy Hackett, and Jamie Farr, and you have a reasonably amusing  way to spend an hour and forty minutes.

Rewatch Review – The Nightmare Before Christmas