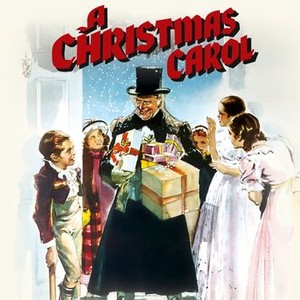 Over the years I’ve seen a fair few versions of A Christmas Carol, or Scrooge as it’s sometimes called, but this 1938 version is a new one on me! There’s no point going too deeply into the story because, as both Harold Melvin & The Blue Notes and Simply Red said, “If you don’t know me by now, you will never, never, never know me”.  I feel comfortable saying this because the whole Scrooge and the ghosts story is very well known. If this were a film about an Aristophanes play like Lysistrata or The Women At The Thesmophoria Festival then I wouldn’t assume that everyone would know the storyline.

So, having decided that everyone who’s still reading this knows at least the bare bones of the story, the obvious next step is to look at this particular version and find out what makes it different. The obvious first step with any film is to look at the cast. For this outing our Ebenezer is played by Reginald Owen. Mr Owen was a replacement for none other than Lionel Barrymore who had read Scrooge for years on the radio. Unfortunately ill health meant he had to drop out. Still, Reginald Owen had been appearing in films since the silent era and would go on into the TV era so the role was in safe hands.

Watch! There’s An Intruder In My Room!

The many film productions of A Christmas Carol adjusted the basic elements of the novel to accommodate the particular stars of their versions. Gene Lockhart was a renowned character actor of this film’s era and thus Bob Cratchit, and his family’s story, received much more screen time than other versions. Similarly, David Warner’s Bob Cratchit also received a lot more screen time in the 1984 version. Kathleen Harrison, playing Mrs. Dilber in 1951, received whole scenes not found in other films or the novel. There is an extra scene added for comedy value; following the arrival of Marley’s ghost, Scrooge calls out the watch.

The watch arrive like clowns falling out of a car only for the ghost to have disappeared. They leave with plenty of jolly chat about spirits and how they would have enjoyed helping out with them. Incidentally, I recognised Marley’s ghost immediately; it was played by Leo G Carroll who had also played Alexander Waverly in my childhood favourite The Man From U.N.C.L.E. Other differences are things like Bob Cratchit actually getting fired and rehired rather than just getting told off and threatened with dismissal. Fred has a much diminished role but does end up being taken on as Scrooge’s partner. This version also finishes a bit earlier; we see Scrooge joining in the Christmas Day festivities but we don’t go as far as Boxing Day.

Your Intruder Seems To Have Extruded!

I mentioned earlier that Gene Lockhart played Bob Cratchit and how the part was expanded due to his fame at the time. I don’t know whether it was down to whimsey or clever casting but Mrs Cratchit was played by Gene’s real life wife Kathleen Lockhart and the daughter, Belinda Cratchit, marks the debut of June Lockhart in an uncredited role. That doesn’t mean as much though, as this was in the era before the person who stirs the tea got a name check; two cards, one says “The End” and the other lists eleven members of the cast.

Apparently MGM released a record-breaking three hundred and seventy five prints of A Christmas Carol so that as many people as possible could see it during the Christmas season. Remember, young stock, this is the time before digital downloads to cinemas. This is when films were put onto reels and actually taken around in a handcart. They also must have decided that this version was going to be a warmer, fuzzier, family friendly version of the story. We don’t see the sky full of wailing, tortured spirits. Neither do we see the neglected children, Want and Ignorance. We also don’t see Scrooge’s love life falling apart or his clothes and upholstery being sold off after his death.

Still, all in all a jolly version.

chevron_left Is there anything extra during the end credits of A Journal for Jordan?
Indie Movie Review – The Handler (2021) chevron_right